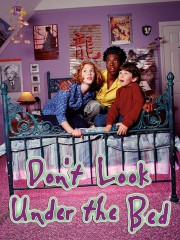 Don't Look Under the Bed

Don't Look Under the Bed Reviews

Kyle M
October 17, 2018
Disney's early take into the horror genre - particularly as a kiddie version to Stephen King's "It" - met the average dullness but with a compelling concept from its dated controversial stance while under the constant influence that actually uncover a rare heart and actual minimally fun time in the genre, despite the silliness and decent satisfaction to the resolving issues. (B-)

Ethan B
November 2, 2015
I've detailed in previous posts my feelings about the current state of children's television. And while the Disney Channel is the main culprit, I do long for 1999 again when Disney Channel Original Movies (DCOMs) were at their peak. Sure, they were cheesy and full of head-scratching character decisions, but we loved them anyway because the protagonists were just like us.

Don't Look Under the Bed follows Frances (Erin Chambers), a teenage girl living in a small town where, one day, strange things start happening. Dogs are on the roof, the high school's pool is filled with gelatin, and the letter "B" is spray painted all over town. Everyone is convinced that it's Frances who's pulling these pranks, but she befriends Larry Houdini (Ty Hodges)--an imaginary person who only she can see--who informs her that the Boogeyman is framing her. So she tries to figure out why he seems to have a bone to pick with her.

The film is full of twists and has some fun scenes that actually hold up fairly well considering the age of the movie and the target demographic.

Not that it's not without a little schmaltz, but believe it or not, compared to its counterparts, Don't Look Under the Bed isn't terribly cloying at all--possibly due to the fact that it's directed by Kenneth Johnson--the creator of The Bionic Woman and The Incredible Hulk TV series. Whatever the reason, if you saw this movie as a child, chances are it stuck with you.

It's Disney Channel's only PG-rated DCOM--and for a good reason. The scenes with the Boogeyman are seriously creepy. They still haunt me to this day. However, they never make the film lose its youthful essence. Rather, it may be more appealing since it fails to insult its young audience. There's a good enough balance between the macabre and the jovial to maintain its fun nature.

The issues it deals with may not be the deepest, but it's no Dude, Where's My Car either. The themes include deep-rooted denial and growing up too fast. It gets its point across without feeling overly preachy. And even older audiences will find the intrinsic emotions relatable and may cause them to conjure up fond memories of their own childhood--much in a Toy Story type of way.

In the last 15 minutes, the characters venture into Boogeyland, which is a real highlight to this movie. The world that the filmmakers create is so spooky and detailed that we feel like we're there too. We wait throughout the whole story to find out where the Boogeyman goes when he's not creating chaos, and the answer definitely lives up to our expectations.

The film's biggest pitfall is its lead actress. She's alright when she's just conversing with other characters, but as soon as she shows any kind of grand emotion, her conviction is nowhere to be found.

But the plot holes are scarce and mostly towards the beginning, so we grant it forgiveness during its final act--which may the single greatest ending to any DCOM. In Don't Look Under the Bed the characters have a lot to lose, and while so many others of its kind take the easy way out, this one really works for it.

Sam M
August 3, 2015
this movie was ok its kinda fun to watch every halloween

Abby T
½ February 2, 2014
So creepy for kids! I remember being thoroughly entertained by this.

Irene F
July 19, 2013
I remember this movie from a long time ago. This film was beautifully casted, wonderfully directed and had me on the edge of my seat the entire time. This had darker tones and mature themes and I recommend this movie for anyone (especially someone who loves horror films.) This movie is a must see.

Monteco J
September 9, 2012
When I was a shorty this was my favorit movie I watched it all most every night

James C
October 5, 2010
I loved this movie as a kid. It was the best diney channel movie ever. The movie was bad ass and had amazing nightmareworlds and dreamworlds. It was magical, funny, entertaing, but most of all just flat out good,

Elester W
January 12, 2010
Still amazing after 10 years!
This is one of Disney's "darker" movies, but it is just the same a classic full of the original life lessons and motifs that Disney teaches in its movies.