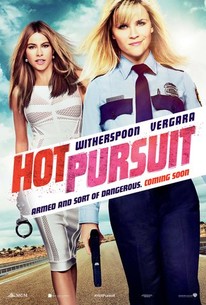 Critics Consensus: Shrill and unfunny, Hot Pursuit bungles what should have been an easy opportunity to showcase Reese Witherspoon and Sofia Vergara's likable odd-couple chemistry.

Critics Consensus: Shrill and unfunny, Hot Pursuit bungles what should have been an easy opportunity to showcase Reese Witherspoon and Sofia Vergara's likable odd-couple chemistry.

Critic Consensus: Shrill and unfunny, Hot Pursuit bungles what should have been an easy opportunity to showcase Reese Witherspoon and Sofia Vergara's likable odd-couple chemistry.

In "Hot Pursuit," an uptight and by-the-book cop (Reese Witherspoon) tries to protect the sexy and outgoing widow (Sofia Vergara) of a drug boss as they race through Texas, pursued by crooked cops and murderous gunmen. -- (C) New Line

On the surface it was presented as a witty lady cop/inadvertent sidekick comedy, but what it felt like was a misogynistic kidney punch.

A picture in which every single element conspires to make it feel like a movie you rented one lonely Saturday night back in 1987 and immediately regretted.

It ostensibly shows two polar opposites transcending stereotypes to finding common ground but is so lazy, laboured and retrograde that I winced throughout. I'm still wincing now!

Let's all just carry on with our lives now.

t's refreshing to see such a road movie being fronted by two female protagonists, particularly when they are played by two such watchable actresses as these.

At least, the mood is light and the antagonists so phony that predicaments remain entirely playful.

Hot Pursuit isn't so godawful that it makes you want Witherspoon to hand back her Oscar nomination.

More than anything, it makes you nostalgic for better movies that follow the same formula.

Predictable jokes and slack performances from cast and director bog down what was already a stock comedy film.

Silly and mindless but fun in its way.

Yeah, it's a mess. The bad reviews are warranted. I think it's so bad because you know Reese Witherspoon can do better than this. Her acting here is very hammy and ditto to her side kick. Truly irritating and coasting by entirely on her looks. Once you get over the disappointment, it is watchable in a dumb movie type of way. If you keep your expectations way low, you might smile a few times. But only a few.

Rarely does a work come along that you sooo want to like, the leads immensely charismatic, that totally disappoints. Somehow these women feel like family (and how that is accomplished is only a wonder) and so watching them fail is like watching yer own family fail: yes, the material is groan-worthy, but delivered by someone loved, double poison. And so I'm gonna blame the writing for the fail. If you like these actresses, don't watch this movie and lose respect for them. The kissing scene alone burns my eyeballs like a hot poker. It hurts. It hurts! Just stop it already.