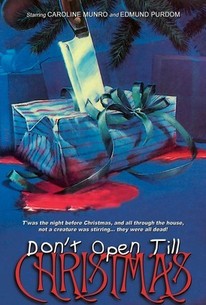 In this run-of-the-mill horror film, it is the Christmas season, and derelicts who need money for food and/or booze get jobs playing Saint Nick in the city's department stores. An insane killer has taken a strong dislike to these Santas and either violently does them in or disfigures them in very ugly ways. A Scotland Yard detective (Edmund Purdom, also the director) has been assigned to capture the serial killer, but when he is unable to get results fast enough, he is replaced by Sgt. Powell (Mark Jones). The list of suspects includes the Scotland Yard detective, a reporter who happens to be on the scene just after one of the crimes is committed, and another fellow who was also around for several of the attacks and is indirectly related to one of the victims. The puzzle will hopefully be solved while some Santas (Father Christmas in England) are still around. ~ Eleanor Mannikka, Rovi

Caroline Munro
as herself

There are no critic reviews yet for Don't Open Till Christmas. Keep checking Rotten Tomatoes for updates!

This one's a really good time, even if it is painfully predictable at times. Large body count, featuring class gore most of which involving Santa Claus as the victim. This slasher takes the form of a who dunnit, but kind of fails on that front as it's pretty obvious who the killer is from the moment that character is introduced. Didn't affect my enjoyment though as theres something about Santa Claus repeatedly being murdered in grisly fashion that never gets old. Recommended.