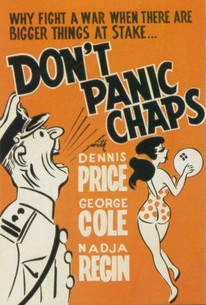 Don't Panic Chaps! is one of the least distinguished films in a run of 1950s British comedies set during World War II. This time around, four subpar Brit soldiers are dropped off on an island in the Adriatic Sea, not far from Sicily, to establish a base for military observation. After some time goes by, it becomes woefully apparent that the submarine crew that was supposed to pick them up, forgot. They soon find that a small group of German soldiers are on the island in that very same situation, forgotten by the war. These two opposing units call a truce and all seems to go relatively well until an attractive young woman shows up on the island (Nadja Regin), setting the soldiers back into a competitive, hostile attitude. ~ Eleanor Mannikka, Rovi

Thomas Foulkes
as Voss
View All

There are no critic reviews yet for Don't Panic Chaps!. Keep checking Rotten Tomatoes for updates!

There are no featured reviews for Don't Panic Chaps! at this time.