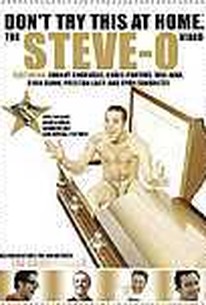 One of the irrepressible mischief-makers who star in MTV's prank hit "Jackass," Steve-O branches out on his own here for more hilariously immature, often dangerous stunts. Kids should take the title "Don't Try This at Home" to heart, because these over-the-top pranks include such horrifying antics as eating rat kebabs, setting oneself on fire and licking male armpits!

There are no critic reviews yet for Don't Try This at Home - The Steve-O Video. Keep checking Rotten Tomatoes for updates!

I?ve never been sure if the Jackass films were my type of humour, it?s all very hit and miss to me, but this film, I have no doubt in saying ? was just a little too sick for my liking. 2 STARS COMEDY

Don't Try This at Home - The Steve-O Video Quotes