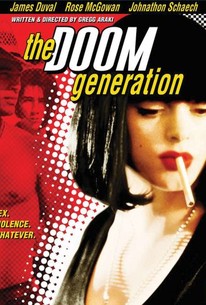 Billed as "a heterosexual movie by Gregg Araki," The Doom Generation is the director's self-styled bad-taste teen film. Amy Blue (Rose McGowan) is an obnoxious teenage speed freak and her boyfriend Jordan White (James Duval) is a passive, slow-witted poseur who won't have sex with her because he's terrified of AIDS (even though they both claim to be virgins). One day, they run across Xavier Red (Johnathon Schaech), a charming but enigmatic drifter who has a bad habit of killing people. Joining the young couple on a seemingly endless road trip, Xavier (or "X,"as the verbally challenged Jordan insists on calling him), proves a threatening and repulsive yet strangely alluring companion whose very presence raises issues of loyalty and sexual identity. The Doom Generation is dotted with a variety of eccentric cameo appearances, including comic Margaret Cho, actress Parker Posey, musician Perry Farrell, "Hollywood Madame" Heidi Fleiss, and onetime Brady Bunch star Christopher Knight. This is the middle installment in Araki's "teen apocalypse trilogy," which also includes 1993's Totally F***ed Up and 1997's Nowhere. ~ Mark Deming, Rovi

Zak Spears
as Dan
View All

News & Interviews for The Doom Generation

View All The Doom Generation News

Critic Reviews for The Doom Generation

Striking to look at, though often offensively opportunistic, this mainly comes across as a throwaway shocker with energy to spare. There's not much thought in evidence though.

A nihilistic comedy about a trio of alienated youngsters, pic is bold not only in its art design, but also in its narrative and tone, a mixture of satire and horror with heavy dosage of steamy sex and macabre violence.

Inspired by Godard's classic Band Apart, Araki's fifth feature is his most audacious and most technically accomplished film to date, reflecting the larger than usual budget and gained experience.

Imagine Natural Born Killers with a sense of humour.

Self-consciously strives for transgressive nihilism without ever recognizing the sheer absurdity of its every component.

While most filmmakers aim to create films that are the pinnacle of their genre, Araki is comfortable exploring a genre's very bottom, its nadir.

Potentially clever, but ultimately the raw violence isn't creative and therefore is offensive.

I'd step on a thumbtack before watching it again.

Hands-down one of the most horrid examples of filmmaking I've seen in ages.

Audience Reviews for The Doom Generation

Pretty sure this was written by a 9 year old who learned the f word. It makes no sense, and they constatnly insult each other using phrases I've not heard since middle school. It gets 1.5 stars for being strange and having killing and a few short blissful moments of Rose McGowan. Otherwise I wanted strangle every character in it.

This movie has a consistent and unique tone, which is why I wasn't surprised this was an Araki film. Araki is fantastic with tone, and in this film, he creates an alternate electro junkie 90s fever-dream where the world is always on the edge of ending and everything is distorted into symbols and pop art to convey the indescribable desperation and fear the characters think rests naturally within their souls. The soundtrack is near constant, and is as much an important character as the three people this film focuses on. The story is an odd love triangle set in post modern crazy land, with the repeated incidents of sudden deadly violence and cases of unforgivable mistaken identity pushing the plot from one sex scene to another. This film pulls into the world of these three characters so fully. Rose McGowan creates the paradigm of the annoying junkie girl from the 90s and it plays well off the sensitive stoner and daring bad boy cutouts of characters. Definitely a film for people who feel like thinking about what they are watching, as much of the detail is in symbolic 90s art creations and the main plot points reference not reality, but B movies. Watching this movie is like falling into an abyss of the 1990s and its complacent pessimism. The film just leaves one feeling unsettled and in this way perfectly captures its era and what its characters are feeling and conveys that to the audience. Fantastic ending, a real blinder that works so well. Cool cameos: Parker Posey and Perry Farrell of Jane's Addiction "Most Fucked Up" highlight: head still talking, the conclusion

Cheesy, sleezy and gory. Rose McGowan still manages to badly act, but James Duval is really endearing somehow. It's worth the watch..but don't get too invested.

Why did I give this movie one star? Because negative stars was not an option. I like shock films. I used to be heavily into the industrial grunge scene (which this film thinks it mimics). I enjoy films that will take it over the edge in all capacities...not a prude here, BUT COME ON! With Rose McGowan playing (?) the over the top, nihilist, wannabe, paired up with her Bill and Ted clone boyfriend who has the IQ ten points lower than a styrofoam ball and a Dark Star poser all running around doing....NOTHING (except each other and anybody else)... You might think, "Well, there is sure to be some funny or witty dialogue." Ummm...No...no there isn't. Think of every expletive imaginable...there is your dialogue for a full 1.5 hours. Think of every act of violence from sexual violence to limbs flying...there is your action. Think of the amount of light emitting from a black hole...there you have your plot. I have passed kidney stones with more presence of mind than this film. THE ONLY redeeming feature is the soundtrack. It has Nine Inch Nails, Front 242, and Verve to name a few. My suggestion...buy the soundtrack and skip the film or risk being angered by never being able to regain that 1.5 hours of your life again that you took to watch this film.