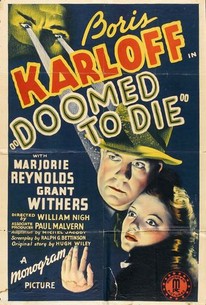 In his final "Mr. Wong" mystery, Boris Karloff solves the case of who killed shipping magnate Cyrus P. Wentworth (Melvin Lang). Wentworth's flagship "The Wentworth Castle" had tragically caught on fire with a tremendous loss of life. Near suicidal, the shipping tycoon is helped into the next world by persons unknown but dunderhead police captain Bill Street (Grant Withers) points the finger at Dick Fleming (William Stelling), the son of a rival tycoon and in love with Wentworth's daughter Cynthia (Catherine Craig). Promising to eat his hat if young Fleming isn't the killer, Street can only watch as enterprising cub reporter Bobby Logan (Marjorie Reynolds) assigns Mr. Wong (Karloff) to solve the case. Which the eminent Oriental sleuth does to the point where Bobby can gleefully add salt to Street's less than edible headgear. The burning of the fictional "Wentworth Castle" was actual footage from the infamous 1934"Morro Castle" fire, a tragedy that took the lives of 137 passengers.

Melvin Lang
as Cyrus B. Wentworth

Critic Reviews for Doomed to Die

Routine but enjoyable fifth entry in the Mr. Wong series.

Audience Reviews for Doomed to Die

Boris Karloff in Monogram Pictures answer to the popular Charlie Chan series. Moving beyond the obvious racial faux pas, Karloff handles his character without obvious demeaning caricature. The story, like many of the "mysteries" churned out by the studios, features many flaws that demand that the viewer look the other way, but so what, that's the nature of the beast. Withers and Reynolds offer nice chemistry as opposites attracting while merely sidekicks to the Oriental mastermind. Actually not bad for a 'B' feature, but not great either.

Detective James Lee Wong (Boris Karloff, starring for the last time as Monogram's answer to Charlie Chan) investigates the death of a shipping magnate. If you can get past Karloff's cringe-inducing "Chinese" makeup and the questionable plot device of an "infrared camera" that's able to read messages after a note has been burnt to ash, this is a fairly intricate and involving mystery.

Calling all cars... Calling all cars... A murderer is on the loose! There is no reason for this movie to be in the 50 Horror Classics box set. Karloff plays detective Mr. Wong, who is brought in to assist in solving the mystery of who killed a shipping tycoon. The alternative title about Wentworth Castle refers to a boat destroyed in a fire, not a building. This was the fifth and last time Karloff played James Lee Wong as directed by William Nigh, but the first one I've seen. Withers co-starred as the slightly dim-witted police Captain Street in all six Mr. Wong mysteries. And this was the third time Marjorie Reynolds co-starred as cub reporter, "Bobbie" Logan. She is the one who enlists Mr. Wong's help. Mr. Wong goes about piecing together the clues, while the family and suspects act melodramatically and Bobbie and the Captain flirt by bickering. Though nothing comes of the romance, it is a fairly typical whodunit mixed with romcom.

A mildly interesting mystery and a relatively subtle (and easy on the racial insensitivity) performance by Boris Karloff almost manage to offset the short duration, herky jerky editing and underwritten screenplay.