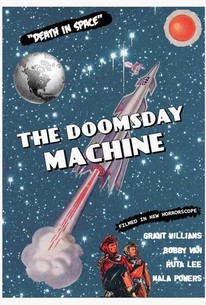 Poorly written, directed and photographed, The Doomsday Machine is one of those cheap sci-fi farragos which rounds up several faded stars and then gives them nothing to work with. Among the trapped former luminaries are Denny Miller, Mala Powers, Bobby Van and Henry Wilcoxon. The plot (for lack of a better word) involves a spaceship and its squabbling crew. The space travellers must bury the hatchet long enough to try to save the Earth from destruction. Beware: That alluring videocassette on your local rental shelves titled Escape From Planet Earth is really Doomsday Machine in disguise.

The Doomsday Machine marks a MST3K Season 4 level challenge. At one point, Frank Conniff states exasperatedly that this experience is like 'watching someone else watching Manos: The Hands of Fate'.

Cinematic Titanic continues to build impressively toward something yet undefined, and Doomsday Machine is an impressive chapter of growth...an experience of sublime bad movie riffing from masters of the genre...the execution is uproarious and near-

Falling smack dab in the middle of so-bad-its-good territory, D-Machine offers a bevy of talent - all mispent - when a planned exploration of planet Venus becomes the last chance of the species after we destroy Terra Firma with the bomb. I had the most fun recognising actors from better known work.

A piece of crap