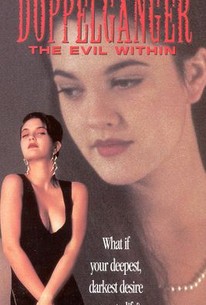 This confusing but enjoyably weird film stars Drew Barrymore (still toying with her good girl/bad girl image) as Holly Gooding, a young woman who apparently stabs her mother to death in New York then shows up on the doorstep of young L.A. screenwriter Patrick (George Newbern), in response to his ad for a prospective roommate. Despite his attraction to her, Patrick is increasingly bewildered by the appearance of Holly's apparent double, whose existence she neither confirms nor denies. At the same time, Holly is tormented by recurring visions of her mother's death and the persistent snooping of an FBI agent. When Patrick becomes convinced that Holly is being pursued by her own evil twin, he learns from ex-nun and phone-sex operator Sister Jan (Sally Kellerman) that the deadly double is Holly's "doppleganger," a supernatural creature which haunts a human being after assuming that person's shape. One plot twist follows another before unraveling completely in a ridiculously contrived double-surprise climax. This film does boast good performances and manages to avoid most standard low-budget horror conventions -- that is, until the last five minutes, wherein its cleverness is derailed by plot holes large enough to fly a zeppelin through.

This trashy horror flick is one of my favorite Drew Barrymore movies.

An okay thriller starring Drew Barrymore, who does a fine job, but the movie itself needs some work.

The ending ruins this movie. Otherwise it's just creepy and weird. But then it just disintegrates into a bloody mess (both figuratively and literally).