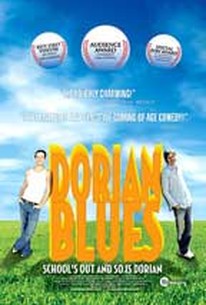 Critics Consensus: Dorian Blues has a familiar outline, but it's filled in with enough sharp writing and solid performances to forgive the sense of déjà vu.

Critics Consensus: Dorian Blues has a familiar outline, but it's filled in with enough sharp writing and solid performances to forgive the sense of déjà vu.

Critic Consensus: Dorian Blues has a familiar outline, but it's filled in with enough sharp writing and solid performances to forgive the sense of déjà vu.

A young man comes to terms with growing up gay in this independent comedy drama. Dorian (Michael McMillian) is a 17-year-old guy living with his family in Upstate New York. Dorian is obviously the second-rate sibling in his household; his older brother Nicky (Lea Coco) is a hotshot athlete who gets the lion's share of attention from their father Tom (Steven Charles Fletcher), while their mother Maria (Mo Quigley) seems too zoned out to pay much mind to anyone. The fact that Dorian is an awkward social misfit is bad enough, but what troubles him even more is the fact he's slowly coming to the realization that he's gay. When Dorian breaks the news to Nicky, his big brother is surprised but accepting, but Tom doesn't handle the news nearly as well, and Dorian is on the outs with his dad as he begins his first semester at New York University. At NYU, Dorian has his first satisfying relationship with fellow student Ben (Cody Nickell), but his first heartbreak soon follows, leaving him in a vulnerable spot when he gets some bad news from home. Dorian Blues was the first feature film from writer and director Tennyson Bardwell.

[Writer-director] Bardwell offers a cheerful, if sometimes strenuously earnest, take on a subject that seems overdue for a lighthearted touch.

Dorian Blues has wit, humor, good performances, and clever technique that catapults the film into the front ranks of coming-out movies.

Dorian Blues makes me yearn for the day that audiences have become so comfortable enough with this subgenre that a clever director can make a spoof in which many if not all of the conventions get lampooned.

Rarely feels fresh. It's special, but in an after-school sort of way.

While Bardwell's screenplay wobbles somewhat in tone, it displays enough wit and charm to compensate for its lack of polish.

The linchpin relationship is the underlying deep bond between the two brothers, and the scenes between McMillian and Coco are well written and equally well played.

It's a sweet and likable movie, if not an expert one, and a respectable entry in the genre.

fun and satisfying %u2014 if not truly groundbreaking

McMillian and the big Coco are excellent, and Fletcher makes something scarily comical of dad's hardball glares and proudly Nixonian grievances.

May not break new ground, but thanks to some sharp writing and ingratiating performances, it farms the old fields quite productively.

The movie is occasionally funny and it has charm, mostly thanks to Michael McMillian. It's not exactly original, but it is borderline entertaining.

Low-budget with decent acting and a pleasant script. It's nice that a light hand was applied to a film that could have been overwrought.

Having recently watched what amounts to a seemingly endless parade of terrible excuses for GLBT Cinema, finally I have found a gem again and had my faith restored. Dorian Blues has obviously been made on the cheap but the incisive, relevant and realistic writing and winning lead performance (Michael McMillian) help sell this touching film. Dorian's family is fairly typical in terms of this kind of film but the interactions between him and his elder brother and his complicated relationship with his father are deftly played and the confrontation at the end of the film by his friends and his mother both surprises and feels utterly accurate and doubly poignant for that. Dorian himself is a fantastic character - quick witted but not selfish with it, he is friendly, charming, slightly goofy but with an undercurrent of quiet rage that he does not have an outlet for. This is a quietly brilliant film.

This movie was such a pleasure for me because I saw a lot of personal experience parallels. I had no brother but the story is made so much more fun because of the brother. Fun movie!

Obviously low budget. Mediocre acting. Starts out promising and then becomes a soapy bunch of whiners feeling sorry for themselves.