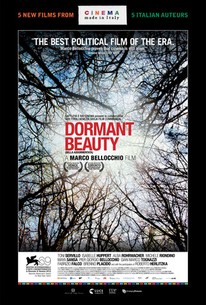 Critics Consensus: As complex and compelling a work as its ripped-from-the-headlines storyline deserves, Dormant Beauty serves as a delightfully thorny testament to director Marco Bellocchio and his talented cast.

Critics Consensus: As complex and compelling a work as its ripped-from-the-headlines storyline deserves, Dormant Beauty serves as a delightfully thorny testament to director Marco Bellocchio and his talented cast.

Critic Consensus: As complex and compelling a work as its ripped-from-the-headlines storyline deserves, Dormant Beauty serves as a delightfully thorny testament to director Marco Bellocchio and his talented cast.

Isabelle Huppert (AMOUR, THE PIANO TEACHER) and Toni Servillo (THE GREAT BEAUTY, GOMORRAH) star in Italian master Bellocchio's compelling ensemble drama in which characters in three interrelated storylines struggle with the moral impasses and compromises of modern life. The film's point of departure is a real-life right-to-euthanasia case that became a national controversy in 2008, culminating in a Parliamentary vote. Against this backdrop Bellocchio explores the differing values and outlook of young and old, reactionary and idealistic: that of a senator (Servillo) with a passionately pro-life daughter (Alba Rohrwacher, I AM LOVE) preparing to cast his vote on the issue; a retired actress and devout Catholic (Huppert) who tends to her own comatose daughter; and a troubled young doctor (Bellocchio's brother, Pier Giorgio) who tries to help a suicidal methadone addict (Maya Sansa, GOOD MORNING NIGHT). (c) Emerging

Gigio Morra
as Persuasore
View All

Now Streaming: Dawn of the Planet of the Apes, Airplane!, and More
Critics Consensus: Edge of Tomorrow is Certified Fresh

It's well acted and gorgeously and tenebrously shot.

Despite the awkward narrative structure, the choppy film serves as a welcome showcase for ably understated performances from veteran Toni Servillo and rising talent Alba Rohrwacher, and a coolly burning Isabelle Huppert.

The film pits their honest passion against the stylized desperation of the actress' religious theater and the decadent hollowness of Berlusconi's political theater.

If "Dormant Beauty" does not rank among Mr. Bellocchio's best movies, it nonetheless still occasionally shows him at his best.

Unlike most movies that rely on TV-news reports to drive the story, Dormant Beauty is complex and humane, and never shrinks to mere spectacle.

Though the movie eschews facile sloganeering, few of its characters or narrative threads are able to develop beyond their function as metaphors.

A tiresome, expository piece of film that only manages to alienate us from the very issue it's trying to get us to consider.

An unabashed melodrama, one that obviously wants to have its finger on the pulse of today, yet unafraid of pulling tricks both sincere and comical.

"Dormant Beauty" is well-written, beautifully performed, and nicely made, if a good 15 minutes overlong. But we couldn't help but feel, given how controversial it proved in advance, that it should've been willing to go a little closer to the edge.

Bellocchio may sometimes shut these characters in their rooms, but his view of them all is as open in mind and spirit as a film can be.

The result is one huge cinematic morass of gloom, largely unleavened by any redeeming humor -- however black -- or true empathy.

Like Bellocchio's draggy, overrated Vincere, this movie wants us to believe in its depth, while mostly just skimming the surface.

Just as Italy is torn over a comatose woman being taken off of life support, Uliano(Toni Servillo), a senator, is called back to Rome for a very important vote on the subject. At the same time, his daughter Maria(Alba Rohrwacher) travels to the woman's hospital to join the vigil. Along the way, she has water thrown in her face at a rest area. Coming to her rescue is Roberto(Michele Riondino) who also writes his phone number on her arm. As unfamiliar as I am with the events that inspired "Dormant Beauty," and with Italian politics in general, it does come as no surprise that Catholic Italy would lose its collective sanity in all proportion to a case involving privacy. That also serves to explain the heightened emotions that Maria is feeling towards Roberto. And if only the movie had stayed with Maria and her deeply conflicted father, this might have been truly something when there is enough in their respective stories for a feature. Instead, the movie muddles it with two other unrelated storylines, one involving Rossa(Maya Sansa) who is trying for the world record in self-destructtion and yet another comatose young woman. So, instead the central themes turn out to be whether anybody is too far gone to save, while transferring the damsel-in-distress syndrome from Italy to the movie itself with its four women in jeopardy. And in fact, outside of one truly classic do-you-know-who-you-are-dealing-with moment, there is sadly no reason for Isabelle Huppert to be present here either.