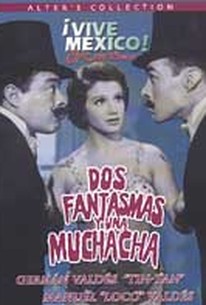 When two men die as a result of a lingering family vendetta, they are forced by the "Ghost Boss" to remain together in an empty theater until they can finally see past their differences. Fifty years later, the two men long to rest in peace, and claim that they have finally become friends. In order to be entirely convinced, however, the "Ghost Boss" has devised a final test to ensure that the men aren't simply faking their friendship. ~ Jason Buchanan, Rovi

There are no critic reviews yet for Dos Fantasmas Y Una Muchacha. Keep checking Rotten Tomatoes for updates!

There are no featured reviews for Dos Fantasmas Y Una Muchacha at this time.