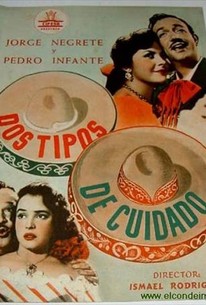 Dos Tippos de Cuidado (Two Careful Fellows) teams a pair of very popular Mexican musical stars. Jorge Negrete and Pedro Infante play a couple of wandering vagabonds who show up at a ranch. Here they try to avoid getting involved with the local female population, but it's a losing battle. Among the ladies are Carmelita Gonzalez and Yolanda Varela, two very good reasons for one to break a promise to oneself. The script was cowritten by regional comedian Carlos Orellana, who also plays an amusing character role. Dos Tippos de Cuidado was the last starring feature of Jorge Negrete, who died in 1953. ~ Hal Erickson, Rovi

Ismael Rodríguez, co-author of the script with Carlos Orellana, who doubles in the film as character comic, directs clearly and with a personal touch.

One of the best comedies in Mexican cinema: it's funny, at times moving, has great songs, and it builds a smart critique on the Mexican macho trope. [Full review in Spanish]

There are no featured reviews for Dos Tipos de Cuidado (Two Careful Fellows) at this time.