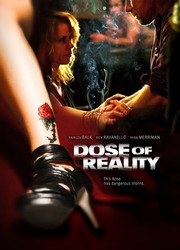 Johnny R
½ February 21, 2014
When i randomly stumbled upon the trailer for DOSE OF REALITY, i was really thrilled. I kind of saw it as a return to the screen for a Fairuza Balk that had been spared from movie appearances in the last few years. And did I enjoyed this film! I used to love the lady in the ninethies and followed her movie career onwards but this particular film, being as different as it was? This psychological thriller, flirting on the line of horror helped me reconciliate with her.

In the middle of the night, more precisely around 2 A.M, bartender Matt (Ryan Merriman) is about to close when he discovers a bloodied, unconscious young woman on the bathroom floor. He immediately warns Tony (Rick Ravanello), the bar manager. The problem is that they'll happen to have a good reason not to want the cops showing up in the place and so Tony decides that they should wait for Rose (Fairuza Balk) to wake and help her demystify the whole thing.

Another problem is that she eventually wakes up and as the two men become suspects in her attempt to remember who did this to her and how, do they want to help a young lady who could be a little less innocent that she appears at first sight?

Despite all of the talent displayed in this little indie film, an emotionally surprising Rick Ravanello and a director able to catch my attention as much with his images as with his own writing. Credits to Chris Glatis for keeping me off balance during the whole thing but still having fun in a way that I wasn't that bothered with what the ending would be (I didn't care before it came). Most of the film is carried on the shoulders of a remarkable Fairuza Balk. Master at her art and at her peek during the whole ride. One of her few rollercoaster character roles that stuck to me like glue! Really happy I watched it.

As much as I loved DOSE, the film might not be suited for everyone as it is more of a dialogue driven movie. Almost a play in my point of view. But I had a lot of fun watching it despite some flaws that were always quickly turned on their heads with the direction that the script was taking. If you can enjoy yourself watching movies that won't spare twists, and/or can love characters when their personas, intentions and behaviors aren't clear and spoiled randomly during the play, you should give this one a go! We sometimes tend to put the emphasis on the word "Different" but I loved about this one that I expected something and ended up fed up with something else.
Really trying to find out more about Chris Glatis previous work. I'd love to have the chance to see his movie CALLBACK. And really looking forward to his next steps, whenever it comes.
9/10

S T
September 9, 2013
I liked this! My boyfriend rented it and I was unsure if I would like it. It was intense and rather dark but it swept me up. I've been a fan of Fairuza Balk for years and was so happy to see her in this. She chews the scenery! She gets to show all her acting chops. I recommend it if you want to see some good acting and enjoy a story that takes time to unfold.

Timothy D
August 3, 2013
If you're a fan of intense, smart, slow- burn drama, where a few characters go head-to-head and transform before your eyes, you definitely should check this out.
Fairuza Balk has never been better - she's electric, haunted, and wounded, and delivers a powerful performance as the lead actress.
The other two main actors totally hold their own against Fairuza with rich, edgy performances too. Great acting all around.
All told a great film with twists that will keep you guessing until the end!!!

Sammy D
May 14, 2013
This movie had a really interesting plot - it kept me glued to the screen all the way through. I found in it a rare quality - I actually couldn't guess what would happen next which really helps with keeping you involved - I'm one of those people who can easily be bored by a movie if it is predictable so this was refreshing to see. The story line touches on some delicate and potentially triggering subjects but they are portrayed really well in the movie. Fairuza Balk is incredible in this film - she really played and developed the role in such a way that it made the character become almost lifelike - there was a real depth to her performance in this film making it that much more enjoyable. The ending of the movie involved a major plot twist which came as a complete shock; however it was both a good and bad ending at the same time. The concept of the ending was a fantastic idea and provided the much needed shock factor in a mystery/thriller movie - but I was left wanting more of a development of the ending. All in all I would really recommend watching if you like a good mystery or thriller!
Page 1 of 1