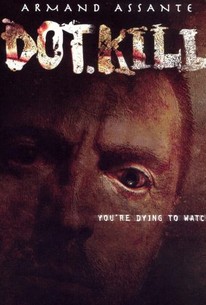 A vicious serial killer is broadcasting his brutal slayings live on the Internet for all to see, and the only hope to put an end to his voyeuristic killing spree is a morphine-addicted detective in this thriller from Ghost Story director John Irvin. The technologically savvy madman has struck once again, and with each killing, drug-addicted detective Charlie Daines (Armand Assante) is coming one step closer to discovering the killer's true identity. As the clock on the next murder counts down, Detective Daines realizes that the killer has begun to take his investigation personally. Upon realizing that the hunter has become the hunted, Detective Daines sets out on a desperate mission to find the killer before he himself is slaughtered live on camera for all the world to see.

There are no featured reviews for Dot.Kill at this time.