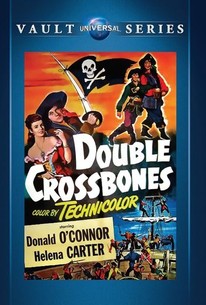 Double Crossbones is an unusually elaborate comedy vehicle for Donald O'Connor. Set in the Carolinas in the 18th century, the film casts O'Connor as Davy Crandall, a bumbling shopkeeper's apprentice. Davy's boss (Hayden Rourke) is in cahoots with the corrupt colonial governor (John Emery), who in turn deals directly with the pirates who sail in and out of port with impunity. Unfairly accused of piracy, Davy finds refuge on a buccaneer's boat. Through circumstances better seen than described, our hapless hero gains the reputation of being the boldest pirate on the Seven Seas. The stellar supporting cast includes Helena Carter as the heroine, Will Geer as O'Connor's aide-de-camp, and Hope Emerson, Alan Napier and Robert Barrat, cast respectively as notorious pirates Anne Bonney, Capt. Kidd and Henry Morgan. ~ Hal Erickson, Rovi

Will Geer
as Tom Botts

Jeff Chandler
as Narrator
View All

The script could have been more imaginative, but in its limited way this is a diverting burlesque on pirate swashbucklers.

Similar in feeling to The Court Jester this takes a genre, the pirate film, that is usually played straight and pokes gentle fun at it while throwing in a few songs and dances along the way. Beautiful color and production design.