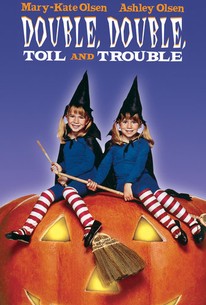 Laughter and chills are served up in equal measure in this made-for-TV movie for the whole family. Kelly and Lynn Farmer (Mary-Kate Olsen and Ashley Olsen) are twin sisters, who, one Halloween, make a surprising discovery about their Aunt Agatha (Cloris Leachman) -- she's a witch! It seems Agatha isn't an especially nice witch, either -- she has a grudge against Kelly and Lynn's father and wants to ruin him financially, and the twins have to step in to stop her. However, along the way they also have to help Agatha's twin sister Sophia (also played by Leachman), who has been trapped by one of Agatha's spells. Mary-Kate & Ashley Olsen: Double, Double, Toil & Trouble also features Meshach Taylor and Eric McCormack.

I enjoyed this as a child and it's an ok kids film. Not something amazing or groundbreaking in any way but an easy and love filled film that tries to teach kids to embrace their differences and celebrate the good points in life.