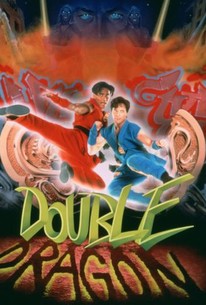 This sci-fi action film, aimed at a younger audience, is based upon a popular video game. It is set in a futuristic Los Angeles after the "big one." Most of the city, including Hollywood is underwater. The city is now called "New Angeles." Jimmy and Billy Lee are teenaged brothers. Their mentor carries one half of a magical dragon amulet. The evil Koga Shuko carries the other half, which he stole. If the dragon were put together the owner would have tremendous powers. Koga is after the boys and the charm. With his evil gang and he chases them through city until the climactic showdown.

Henry Kingi
as Bo Abobo No. 2

Vanna White
as Herself

George Hamilton
as Himself

Vincent Klyn
as Wild One

Brian Imada
as Referee
View All

[A] clever and lively adaptation of the popular video game.

Even kids won't get much of a kick out of this high-energy, low-IQ futuristic slugfest.

An incoherent children's adventure based on a popular video game.

The grim view of the future is nothing new, the special effects involve poorly used matte paintings and pyrotechnics, and the actors do far too many double-takes.

While clumsily paced by first-time director Jim Yukich and amateurishly acted, the picture does take place against the imaginative backdrop of New Angeles, the urban archipelago formed when the Big One crumpled Southern California.

Since nothing about the film is taken seriously, there's a bit of fun to be had with the exaggerated makeup effects, pervasive sarcasm, and kung fu combat.

Well shot and set-dressed, but otherwise full of bad dialogue, poor acting, and so very little plot or even fighting scenes. To be avoided!

The thing about this movie is that it's absolutely mediocre. [Full review in Spanish]

Even at eleven years old I knew "Double Dragon" sucked.

There is a genial exuberance to the lead performances of Wolf and Dacascos, who behave as though the Lee brothers aren't too many rungs above Beavis and Butt-Head on the evolutionary ladder.

A surprisingly timid and largely toothless action fantasy for kids.

How hard would it be to come up with a story at least as good as that of the original Nintendo game? Impossible, apparently.

I mean, if you think Street Fighter was bad, at least it had Raul Julia's greatest performance as the villain and some great action sequences, but after learning what the Nostalgia Critic himself has taught me about this film, I now agree with him. But before we can go to the negatives, I have three praises for this film and those are the decent special effects, the solid costume designs, and the well-choreographed action sequences. But those three praises didn't save this god-awful film as everything went extremely wrong. The story was too predictable and very simple for a video game adaptation, the dialogue was unbelievably cheesy, the characters were cardboard cutouts, and the writing/editing was choppy. For example, near the end of the film, where Billy and Jimmy are about to battle each other, it showed a Double Dragon video game, which raises one question: How can a video game adaptation have a video game in which it was based on? Looks like the director himself didn't had time to explain and just focused on the action. Why can't Hollywood ever make a good video game adaptation? Why do they always have to alter the story lines that made the video games so popular? It looks like those two questions were never answered until later in the 2000s that some video game adaptations have finally started to become good. I wish there was a remake of this, but since it bombed at the box office, I guess Hollywood's gonna move on now.

This is very poor TV Movie with a poor acting.

Worst based on the original video game in marital arts film I ever saw, looked stupid and crap.