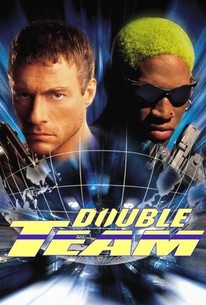 Like John Woo and Ringo Lam before him, noted Hong Kong action director Tsui Hark made his American filmmaking debut with a thriller starring Jean-Claude Van Damme. For this film, Hark also had the privilege of guiding basketball star Dennis Rodman through his first dramatic role. American anti-terrorist agent Jack Quinn (Van Damme) has retired from duty, content to stay with his pregnant wife at his seaside hideaway. However, the CIA lure him back into duty for one last mission: wiping out crazed international terrorist Stavros (Mickey Rourke). Quinn flies to Antwerp to ambush Stavros, but his plan fails; Quinn is captured and imprisoned in "The Colony," a prison camp for spies "too valuable to kill and too dangerous to set free." To further torture Quinn, Stavros kidnaps Quinn's wife; after she gives birth to their son, Stavros keeps him captive, surrounded by land mines and wild animals. Quinn escapes and makes plans to rescue his wife and child, but he can't do it alone, so he seeks the help of Yaz (Rodman), a top-level underground arms merchant with a tendency towards flamboyant body modification. Rodman also appears with R&B vocalist Crystal Waters on the song "Just a Freak" which appears on the film's soundtrack.

Mario Opinato
as James
View All

Van Damme was better in such earlier films as Timecop and Sudden Death because he had more to do: Here he's at the mercy of the jam-packed plot.

Rodman is more fun to watch here than either co-star, given his array of earrings and nose rings, plus hair that changes color more frequently than the first lady changes her do.

The pinnacle of suck.

Exactly as bad as you'd imagine a Van Damme-Rodman collaboration to be.

A gimmick movie, worth a look on cheap rental night.

If you're honestly wondering whether this film is any good, I can't help you.

The talent of the director is not quite enough to make up for the minimal ability exhibited by some of the other people working on the production.

with enough voltage to rock the free world?

Van Damme kicks a tiger in the face, i'll give some credit to that. Tsui Hark can't keep the camera in the same place for more than 5 seconds.

The movie looked very expensive to be a van damme movie....but I can't say that Rodman did a good job