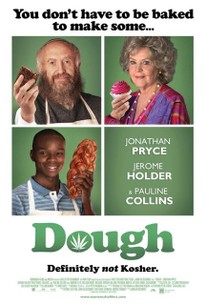 Curmudgeonly widower Nat Dayan (Tony award-winning actor Jonathan Pryce, currently in HBO's "Game of Thrones") clings to his way of life as a Kosher bakery shop owner in London's East End. Understaffed, Nat reluctantly enlists the help of teenager Ayyash (Jerome Holder), who has a secret side gig selling marijuana to help his immigrant mother make ends meet. When Ayyash accidentally drops his stash into the mixing dough, the challah starts flying off the shelves and an unlikely friendship forms between the old Jewish baker and his young Muslim apprentice. DOUGH is a warmhearted and humorous story about overcoming prejudice and finding redemption in unexpected places.

Melanie Freeman
as Olivia
View All

Neither the social realism nor the stoner antics feel sufficiently thought-through, making Dough the definition of half-baked.

Best filed alongside tandoori chicken pizza in the list of hybrid recipes that should never have left the kitchen ...

[Pryce] is horribly let down by a predictable paint-by-numbers script and some overcooked supporting performances.

It remains a mystery why Pryce isn't getting more substantial scripts through his letterbox: he looks a touch squandered tossing flour and sugar around.

The plot may turn on a hoary comic conceit, but its plea for tolerance in troubled times is as welcome as the familiar faces in the willing cast.

In their rush to provide a happy ending, the filmmakers lose sight of many of their own supporting characters and fill the plot with far too many artificial sweeteners.

A socially conscious movie that is offensive in an unconscionable manner.

It is well-intentioned and occasionally has the odd moment of inspired wit, but it isn't enough, as the dough in this mix too often fails to rise to the occasion, even if it does have a warm touch.

Dough is not a film for serious cinephiles but it is feeding a need for an audience hungry for this kind of warmhearted, hopeful story.

Interesting relationship between a Jewish baker and his Muslim employee gets lost in a dopey plot about marijuana and the mob.

English-Austrian director John Goldschmidt and his two writers have put together a tale that, while utterly predictable, is also simply delicious.

A striking lack of imagination. [Full Review in Spanish]

Dough is pleasant enough. If you're looking for a sweet British confection that doesn't tax your brain, you should be entertained. Jonathan Pryce and Jerome Holder are working with cardboard characters but they give them life. They are captivating despite the utter predictability of the narrative. I mean, how much do you wanna bet that these disparate individuals will eventually learn to embrace each other's differences by the end? . This is essentially one of those culture clash sitcoms from the 1970s with a few minor tweaks. Anyone remember Chico and the Man? I miss that show. fastfilmreviews.com