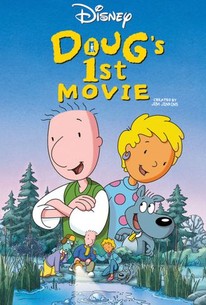 Critics Consensus: Doug's 1st Movie may entertain very young fans of its main character, but essentially amounts to a forgettable feature-length episode of his show.

Critics Consensus: Doug's 1st Movie may entertain very young fans of its main character, but essentially amounts to a forgettable feature-length episode of his show.

Critic Consensus: Doug's 1st Movie may entertain very young fans of its main character, but essentially amounts to a forgettable feature-length episode of his show.

Doug Funnie and his friends from Bluffington make the leap from TV to the big screen in the animated comedy Doug's 1st Movie, based on the long-running children's series. Doug (voiced by Thomas McHugh) is a good-natured 12-year-old who is chronically infatuated with his classmate Patti Mayonnaise (voiced by Constance Shulman). Doug's best friend Skeeter (voiced by Fred Newman) is convinced there's a monster in Bluffington's Lucky Duck Lake. Surprisingly enough, it turns out Skeeter is right -- pollutants dumped in the lake by cranky factory owner Bill Bluff (voiced by Doug Preis) have spawned a large but thankfully friendly beast Doug and Skeeter name Herman Melville. Doug and Skeeter both want to protect Herman -- Doug so he can look cool in front of Patti, and Skeeter so he can prove the damage Bluff is doing to the environment -- but that isn't so simple when Bluff sends his hired guns to track down the monster. Doug creator Jim Jenkins served as co-producer for this film adaptation, which like the TV series was created by the Jumbo Pictures studios.

[It's] a cute little flick for kids that delivers an elementary message about doing the right thing.... Beyond that, it doesn't differ much from the weekly Disney series: thin story lines decorated with charismatic voices and silly one-liners.

Little more than a typical TV segment writ large for the mutiplexes.

These spin-offs remain animation on the cheap, and none yet -- straitjacketed by fidelity to its respective series -- has attained the density of image and kineticism of design of the art form's true originals.

The film hasn't much entertainment value for those much over the age of 10. There's not a thing in the world wrong with that.

A daydreamer who just wants to do the right thing, Doug is a great role model for kids.

A sweetly spoofy, thoughtful animated feature, sure to please its preteen target audience.

Doug saves a lake from a polluting monster.

It's refreshingly non-violent, unflashy, not smart alecky and mercifully free of insipid songs.

Join me in praying that Doug's 2nd Movie never happens.

For even the little ones in the audience, Doug's First Movie will feel long and drawn out.

No harm done, really, but nothing of lasting value either.

This was one of those Nickelodeon cartoons that ran during the early 90's which I used to watch religiously. Along with 'Rugrats' and 'Hey Arnold!' the toons of that time were really decent and quite fresh in terms of originality and artistic style. 'Doug' being the most simplistic to look at compared to the others, yet I still can't recall how or why I actually got into this. The movie has the same age old issue, can it work when stretched out to a films length? Quite plainly I would say yes, this will not appeal to adults in the slightest unless like me you like the toon. Its purely 100% for kids and not meant to be anything more, hence its extremely errr...childish, simple and unoriginal. I thought everything here worked really well to be honest, all the characters seem to be voiced by the regular people, give or take. Everything visually is recognisable from the daytime cartoon, its been spruced up of course but it still looks like Doug and there hasn't been any CGI tomfoolery. That fact I like, the fact they kept it pure like the original material and didn't use CGI, that's good (at least I don't think they used CGI). The only thing I didn't really like here was the plot believe it or not. Now I know this will sound stupid but the plot was unrealistic, let me explain. I'm reasonably sure that in all the 'Doug' cartoons the plot has always been relatable, in other words about problems kids face in school, at home, growing up, daily life we all can understand etc...It has never ventured into the realms of complete fantasy, I don't think. So this movie to have the plot based around a dinosaur lake monster running amok is kinda crappy frankly, just seems totally lame and as if they couldn't think of anything else. 'Ah lets just stick a monster in their and they make friends with it blah blah blah', a cartoon version of 'Splash' or 'Free Willy'. If you know this franchise then you'll know what to expect, good morals, good-natured harmless silliness and plenty of sickly kiddie romance. Although it doesn't seem as witty with Doug's regular daydream interventions which he had in the daily cartoon. There does seem to be a clear difference between the early Nickelodeon Doug and this Disney Doug, early Doug did seem cheaper with those corny tacky homemade sound effects and sketchy animation, but that was its charm. I never saw the later Disney Doug episodes but I've heard bad things. This big screen adventure does lack that charm but it still manages to do what it set out to do. The film is enjoyable and still looks nice but admittedly isn't as rich or pretty as other animations. You really have gotta be a fan to enjoy this, otherwise I can fully understand if you think it looks terrible. I think time has passed for this franchise and film now, the moment has gone and it doesn't really stand the test of time, plus no Billy West! its still OK though.

Doug's 1st (and thankfully last) movie. I like the show as a kid but this just stunk

one of the earliest disney films i ever saw, and it still is great to watch

yet another childhood memory, one that i actually wouldnt mind getting back into. the thing i remember about this show is on one episode, Doug had a zit. and on a cartoon, that just looks cool for some reason, so i couldnt wait to be a teenager and have zits. then girls started having boobs and i wished i hadnt cursed myself. also Dougs best friend is blue and his bully is green. also not very interesting but looked cool as a kid. ok thats all i got for this, i sincerely hope nobody had the displeasure of reading this review.