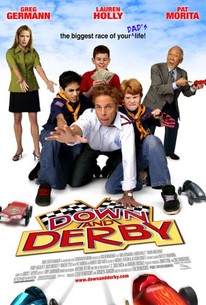 Down and Derby Photos

A handful of men begin behaving like children when their kids enter a Boy Scout competition in this family-friendly comedy. Ever since he was in fifth grade, Phil Davis (Greg Germann) has been coming in second place to Ace Montana (Marc Raymond) whenever they've been in some sort of competition together, and now that Phil and Ace are both middle-aged fathers, history seems to repeat itself when Brady (Adam Hicks), Phil's son, loses the city junior basketball championship to a team featuring Ace's boy. When Phil learns that Brady will be going up against Ace's son again in his Boy Scout troop's annual Pinewood Derby race, Phil decides it time to end the Davis family's losing ways once and for all, and with help from his childhood friends Blaine (Ross Brockley) and Jimmy (Perry Anzilotti), Phil sets out to build the perfect Pinewood derby car -- whether or not that's what Brady has in mind. Produced with the cooperation of the Boy Scouts of America, Down and Derby also stars Lauren Holly, Pat Morita, and Hunter Tylo.

Don Murphy
as Himself

Great Dane
as Shaquille the Dog

Oscar and Elmer
as Champ the Dog

Critic Reviews for Down and Derby

It's all about these fathers and how crazy they are.

Typical for this type of family-skewing comedy, performances vacillate between engagingly broad and annoyingly overstated.

A cute family feature about the competitive little boy in every dad.

Down and Derby has the look and feel of something that might turn up on a cable channel devoted to 'family-friendly' entertainment, where it might find a greater audience.

Down and Derby is amusing enough to make a bit of money at the box office and become a shelf-stable DVD for years to come.

Silly satire of competitive dads has some iffy humor.

Does better on DVD than it did on the big screen, as long as your expectations aren't too high.

Imbecilic, unreasonable and wretchedly unfunny.... The film is 5,580 seconds long, and not one of those seconds is believable.

A simple pleasure from start to finish.

Heads in predictable directions and illuminates little besides the process of crafting cars to compete in the Scouts' Pinewood Derby.

Audience Reviews for Down and Derby

The intensely competitive world of Pine Derby Racing is examined. In this kid-friendly tale of three fathers and the obsession of competition. That not only threatens their sanity, but their families as well. Very cliched, almost to the point of parody. But, it is fun to watch.

Down and Derby Quotes