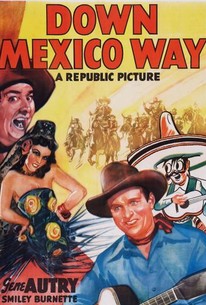 Like 1940's Melody Ranch, the 1941 Gene Autry vehicle Down Mexico Way was designed as a "special", to be promoted separately from Autry's regular B-western series as an A-picture attraction. The story gets under way when a pair of con artists, Gibson (Sidney Blackmer) and Allen (Joe Sawyer), breeze into the town of Sage City claiming to be movie producers. The two scoundrels promise to film a movie in the little burg on the condition that the townsfolk pony up the necessary production fees. When Gene Autry and his sidekick Frog (Smiley Burnette) catch up with Gibson and Allen, the two huckster head across the border into Mexico-a big mistake, since reformed bandit Pancho Grande (Harold Huber) and his amigos don't cotton to being swindled. In addition to the expected musical interludes from Gene Autry, Down Mexico Way includes several Latino numbers, courtesy of the Herrera Sisters.

Critic Reviews for Down Mexico Way

Republic responded to FDR's request to make a pic in a neighboring South of the Border country, as part of the administration's Good Neighbor Policy.

Audience Reviews for Down Mexico Way

There are no featured audience reviews yet. Click the link below to see what others say about Down Mexico Way!