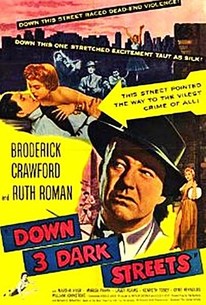 Coadapted by The Gordons from their novel Case File FBI, Down Three Dark Streets stars Broderick Crawford as a no-nonsense FBI agent. Hoping to avenge the death of his partner Kenneth Tobey, Crawford almost single-handedly takes on the three investigations which Tobey had been pursuing. One involves a gang of car thieves; the second concerns a fugitive gangster; and the third deals with an extortion racket. Of the three leading ladies--Martha Hyer, Ruth Roman, Marisa Pavan--Ms. Pavan turns the most fascinating performance as the blind witness to a murder. The climax is staged around the fabled "Hollywood" sign that dominates the hills bordering the film capital. Most of the production personnel involved with Down Three Dark Streets would later set up shop at Dick Powell's Four Star Productions.

Larry Hudson
as Randol
View All

The guilty party stood out like a right-wing Republican at a Grateful Dead concert.

There are no featured audience reviews yet. Click the link below to see what others say about Down Three Dark Streets!