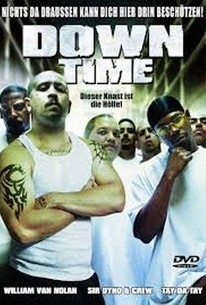 A man who turns to crime to survive finds it even more difficult to get by behind bars in this hard-edged drama. Slim (William Van Nolan) is a drug dealer who sells heroin in order to finance his own habit. Slim and his partner (Peter Quartaroli) think they have a major dope deal set up, but they discover too late that they've been set up for a police "sting," and Slim's best efforts at plea bargaining still leave him with a long sentence in a hardscrabble state prison in the Deep South. Slim quickly discovers that much of the prison population is divided along strict racial lines, and while Slim does his best to stay away from the racially inspired violence, a drug deal gone sour among his fellow inmates puts Slim on the enemies list of Sammytown (Sam McBride), the brutal leader of the prison's white supremacist population. As Slim tries his best to survive his time in the state lockup, he soon hears from both his former partner and his ex-girlfriend (Joy Garner) -- and they don't have his best interest at heart. Down Time was the first feature film from writer/director Sean Wilson, which he claims was based on his own experiences as a prison inmate.

Critic Reviews for Down Time

There are no critic reviews yet for Down Time. Keep checking Rotten Tomatoes for updates!

There are no featured reviews for Down Time at this time.