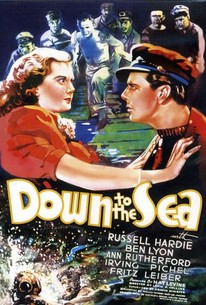 In its first few years of existence, Republic Pictures evinced an eagerness to tackle any sort of offbeat subject. The studio's Down to the Sea has to be one of the only films of the 1930s to concentrate on a pair of Greek sponge fishermen. Played by Russell Hardie and Ben Lyon, the heroes battle over the affections of Ann Rutherford, whose father controls much of Florida's sponge industry. The climactic scenes benefit from the fine location and underwater photography, courtesy of cinematographer Harry Neumann.

Critic Reviews for Down to the Sea

There are no critic reviews yet for Down to the Sea. Keep checking Rotten Tomatoes for updates!

There are no featured reviews for Down to the Sea at this time.

Down to the Sea Quotes