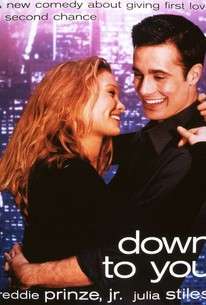 Critics Consensus: Down to You is ruined by a bland, by-the-numbers plot and an awful script.

Critics Consensus: Down to You is ruined by a bland, by-the-numbers plot and an awful script.

Critic Consensus: Down to You is ruined by a bland, by-the-numbers plot and an awful script.

Down to You Videos

Down to You Photos

This Big Apple-based romantic comedy charts the tumultuous relationship between liberal arts student and budding chef Al (Freddie Prinze Jr.) and his first girlfriend, Imogen (Julia Stiles), a self-possessed freshman who wants to become an artist. After meeting in a bar, the pair jump into a giddy, passionate affair that's grown-up enough to include face time between the young lovers and Al's DJ mom and TV-chef dad (Henry Winkler). After a summer abroad, however, Imogen feels like the relationship is robbing her of her youth, and the couple must struggle with romantic and domestic growing pains. Meanwhile, their wacky friends -- who include porn stars (Selma Blair and Zak Orth), stoners (Rosario Dawson), a mullet-haired lunkhead (Shawn Hatosy), and a Jim Morrison look-alike named Jim Morrison (Ashton Kutcher) -- provide laughs, advice, and sexual temptation. The debut film from writer/director Kris Isacsson, the teen-themed Down to You marked a change of pace for normally grown-up Miramax Films. In addition to a slew of recent rock and pop, the film prominently features music from such downtown New York fixtures of the past decade as Deee-Lite ("Groove is in the Heart") and Cibo Matto ("Moonchild").

Chris Desmond
as Man With Emma

Mark Blum
as The Interviewer

Critic Reviews for Down to You

It's like watching the dreckiest of teen puppy courtships trying to pass itself off as 'Annie Hall.

It's all reasonably pleasant to watch, but Isacsson doesn't seem to know what to do with the story once Al and Imogen fall in love.

Al (Prinze) and Imogen (Stiles) are 19-year-olds tackling New York college life. The course of their relationship is charted in numbing detail and interspersed with the antics of their quirky friends.

[Director Kris Isacsson] tries to bring a little enterprise to the inevitable scenes of bickering and moody silence, but by now the vitalising tactics seem out of place.

Not in any way a harmful or distasteful film, however clumsy it might be, Down to You is simply entirely forgettable.

It's hard to determine exactly where I gave up on Down to You, but I'm pretty sure it was right after the opening credits.

Julia Stiles is fetching, but no surprises rain on the limpid parade of familiar post-adolescent love.

a mostly bitter, sometimes downright grim fairy tale in which Cinderella becomes a stoner and Prince Charming winds up getting his stomach pumped.

When the lovers finally do find a reason to fight, the film takes a turn into hand-wringing melodrama from which it never recovers.

Audience Reviews for Down to You

Patchy but cute. Some of the story and acting, particularly from the supporting cast, is painfully hammy and nearly puts this in b grade hell. However, Julia Stiles and Freddie Prinz Jnr are both so sweet in this it kind of balances out. It's not a great movie or a must see, but for anyone who liked all the 90's teen films, this is enjoyable enough.

Julia Stiles at her chick-flick best....It's good, not great.

A quite okay romantic-comedy, but bit ridiculous.

Down to You Quotes