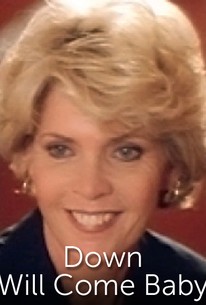 With her parents on the verge of divorce, young Robin Garr (Evan Rachel Wood)does not any more stress in her life. Unfortunately, while attending summer camp, Robin's best friend, a strangely melancholy girl named Amelia (Katie Booze-Mooney) accidentally drowns, a tragedy for which Robin holds herself responsible. It is while in this emotionally fragile state that Robin befriends a seemingly benign middle-aged lady named Dorothy (Diana Scarwid), who ends up being hired as a nanny by Robin's mother Leah (Meredith Baxter). Soon thereafter, Leah begins to wonder if inviting Dorothy into her household was a good idea: The woman proves to have an obsession about neatness, and her outward gentility masks the soul of a control freak. Slowly but surely, what begins as merely an uncomfortable situation evoles into stark, raw terror--and to make matters worse, there seems to be a sinister connection between Dorothy and the late, lamented Amelia! Made for the CBS TV network, Down Will Come Baby first aired on May 4, 1999.

Roberto Guajardo
as Waiter
View All

Critic Reviews for Down Will Come Baby

There are no critic reviews yet for Down Will Come Baby. Keep checking Rotten Tomatoes for updates!

There are no featured reviews for Down Will Come Baby at this time.

Down Will Come Baby Quotes