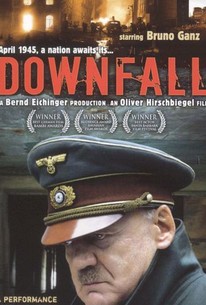 In the dead of a November night in 1942, SS officers through the woods escort a group of young women to Wolf's Lair, Hitler's headquarters in Eastern Prussia. They are candidates for the post of personal secretary to the Fuehrer. Among them is 22-year-old Traudl Junge, a fresh-faced girl from Munich. Traudl is chosen for the job and she is overcome with joy at the thought of serving beside her Fuehrer. BERLIN, APRIL 20, 1945: Hitler has retreated to a bunker system under the German Chancellery. Traudl Junge is asleep in her room, deep beneath the ground. She is awakened by tremors from artillery fire. The enemy is getting closer. Charting the last 10 days of Hitler's life, from his 56th birthday on April 20th, 1945 to his suicide on April 30th, the film uses multiple characters to show the chaos of a country coming apart at the seams, from Hitler's henchman under the streets of Berlin, to the soldiers and civilians fighting and dying as the Soviet Army ravaged the city above.

Does Downfall "humanize" Hitler and his henchmen, as its critics have complained? Yes, and it should: to pretend these villains were less than human is to let ourselves off the hook, to take the easy and dangerous exit of demonology.

May be the definitive account of Hitler's final days and the collapse of the Third Reich.

Some demons are too extreme to comprehend, but Hirschbiegel's film nonetheless provides a painfully unflinching glimpse into the outer workings of the mortally wounded Third Reich.

With a steely, unblinking resolve, Downfall stares into the abyss, but does not pretend to comprehend it.

Viewed through a North American lens, the movie itself seems more familiar than fascinating, more innocuous than inflammatory, and, at 21/2 hours, more tedious than anything else.

For emotional effect it trades less in the spectacle of ebbing power than the tragedy of power's mysterious thrall.

It is a stunning performance of light and shade, tracing his descent from total denial to despair, disillusionment and defeat.

Most impressive of all is how, with the world closing in on the ranting, paranoid monster, Ganz ratchets down his performance from towering to cowering in minute increments.

It asks a great deal of indulgence from its audience, almost as though nothing less than an endurance test would do in dealing with this heavyweight subject. And that, despite admirable aims, doesn't make for great cinema.

...an unflinching, hard, relentlessly honest movie that refuses to ask questions that have easy answers. It is also brilliantly acted, written and focused...

"Downfall" isn't about commuting history's sentence for the Nazis, but heeding its warning - a gruesome, sustained-tension lesson about informed politics and whether those who left evil to its own devices could arrive at a place of complicit guilt.

A very interesting look at an oft-over-reviewed subject.

Based on true life memoirs of people who were actually there, this starkly gripping depiction of the last days of the third reich can hardly be described as an enjoyable experience. The german people are suffering terrible hardship as the attacking Russian forces reach Berlin while Hitler's cowardly henchmen are attempting to make their escape or plotting the murder/suicides of themselves and their families when faced with the consequences of their monstrous actions. Lynch mobs roam the streets dispensing "justice" against suspected traitors (who in Hitler's deranged eyes seemed to include virtually everyone) and ill-equipped professional german soldiers are ordered to fight to the death in the face of certain defeat. The entire cast of the film are superb, but it is Bruno Ganz's remarkable performance that is the centrepiece of the film. His portrayal of Hitler veering between twitching broken shell and wild-eyed delusional maniac (who even at the end still commanded fanatical belief in him from some of his people) is totally convincing. It is still difficult to fully comprehend what you are seeing even as it happens in front of your eyes and I was left feeling shellshocked at the film's end;.possibly the most important film made about WWII and something everyone simply must see.

That this, the most accessible, most illuminating film about the end of the Third Reich and the last days of Adolph Hitler, comes from Germany ... well, its mind-boggling. Ganz's performance is soul searing and no one in the piece deserts the high standards he sets. There are no false moments to be found here. A masterwork. A revelation.

Downfall is a true portrayal of the last days of a "human" Adolf Hitler along with the death of a social-political ideology in striking detail. An intimate encounter with history that made me understand that commitment to an ideology is deeply founded on personal absolute truths, realities, and beliefs. Important.