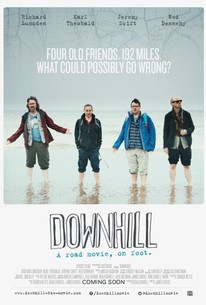 Torben Betts' screenplay for this engaging, quintessentially British road/rambling movie combines knockabout comedy with surprisingly bleak observations about the way the men's lives have all veered off course.

A grey, farty plod, with increasingly little to sustain it bar the scenery.

Often witty and provocative, if occasionally a little heavy on its feet, this will have men of a certain age nodding sagely.

Downhill is a home-grown treat, and the perfect solution to anyone seeking an alternative to the preponderance of overblown blockbusters on screens big and small.

It's extremely rare for a low-budget mock-documentary to come together as well as this scruffy little British comedy.

An accomplished piece of cinema.

While nothing too surprising occurs, it's a promising blend of wisdom and playfulness from big-screen newcomers Torben Betts and James Rouse.

There are no featured reviews for Downhill at this time.