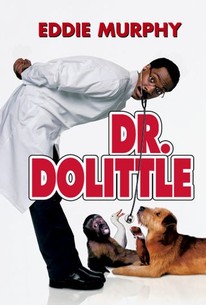 Critics Consensus: Doctor Dolittle finds some mirth in the novelty of wisecracking critters, but this family feature's treacly tone is made queasy by a reliance on scatological gags that undercut the intended warmth.

Critics Consensus: Doctor Dolittle finds some mirth in the novelty of wisecracking critters, but this family feature's treacly tone is made queasy by a reliance on scatological gags that undercut the intended warmth.

Critic Consensus: Doctor Dolittle finds some mirth in the novelty of wisecracking critters, but this family feature's treacly tone is made queasy by a reliance on scatological gags that undercut the intended warmth.

Betty Thomas directed this adaptation of the classic children's stories by Hugh Lofting (1886-1947), updating the original concepts into the present day. When noted surgeon Dr. John Dolittle (Eddie Murphy) swerves his car to avoid hitting a dog, he hits his head on the windshield, triggering his long-dormant gift for holding conversations with animals. Friends, associates and his wife Lisa (Kristen Wilson), all express concern, but Dr. Dolittle is happy as he takes on new animal clients. Soon Dolittle's clinic becomes a haven for talking rats, birds, and other assorted members of the animal kingdom, and Dolittle's new four-legged and furry friends, in turn, teach him a few things about being human. The effects seamlessly combine Jim Henson Creature Shop animatronics, computer graphics, and real animals, but some viewers might yearn for a return of the Great Pink Sea Snail and Lofting's other imaginative creatures. The 1967 20th Century Fox musical Dr. Dolittle starred Rex Harrison in a strange storyline that began with Dolittle escaping from a lunatic asylum and leaving the Victorian village Puddleby-by-the-Marsh, England, to search the South Seas for the Great Pink Sea Snail. Along the way, he gathered diverse Dolittle denizens and animal anomalies, including the Giant Moon Moth and the famed, two-headed Pushmi-Pullyu. The earlier film spawned the Oscar-winning popular song success, "Talk To The Animals," along with numerous now-forgotten toys, books, and collectibles. ~ Bhob Stewart, Rovi

Albert Brooks
as Jacob The Tiger

Don Calfa
as Patient at Hammersmith

Royce D. Applegate
as 'I Love You' Dog Voice

Chad Einbinder
as Bettleheim The Cat

Slim on story and rife with scatological jokes, the film may strike a chord with pre-teens but misses for an older crowd despite some nifty effects and broad humor.

Murphy's likeable, the script's laden with a gaggle of one-liners, and there's even a vague message nestling beneath the zoological chaos.

Murphy himself is rather dull in the straight man role, and the jokes are pretty coarse for a family film. But it's certainly better than the lacklustre sequel, which finds Eddie playing second fiddle to a performing bear.

Doctor Doolittle seems to have borrowed the idea from the execrable Theodore Rex that if your anthropomorphic creature can't say anything interesting, you should just keep him talking fast in the hope no one will notice.

The old actor's rule -- never work with animals or kids -- has never seemed more apt. The animals steal the scene from Murphy every time, and he gives it up gladly.

The only thing that keeps this even a little bit tolerable is the superlative work by the Henson people.

This gimmicky animal tale is crude but funny.

It's quite funny for the first thirty minutes, but after that it's kind of like beating a dead horse. A dead talking horse.

Dr. Dolittle is destined to be a money maker, since kids will see the talking animals and be instantly taken in, but it is the film's utter lack of anything wholesome that causes its downfall.

One of the things about Dr. Dolittle that helps raise it above kiddy-fare and give the accompanying adults a bit of amusing entertainment are the not-so-kid-targeted jokes.

Hugh Lofting's Dr.Dolittle is really a bad decision to make an adaptation to the cinema. Both the original picture and this remake are a very dumb and honest... a piece of crap. Rotten.

This is yet another awful remake of a classic film. Eddie Murphy plays Dr. Doolittle, and this is one of the films that he's done where his acting suffered quite a bit and his comedic delivery started to be quite boring. After this dreadful film, Eddie Murphy starred in Bowfinger which was great, but really Dr. Doolittle was the one that was one of many misfires to come from the actor. This is a boring, unfunny film that should never have been made. This film doesn't entertain, but it might entertain young kids and families looking for a good time, however this is mostly a moronic remake of a classic film, and everything about the film seems out of place. This is a pointless comedy that should never have been made, and the cast seem bored and the jokes were stale. The film gets tiresome very quickly and you simply want it to end. Eddie Murphy started making crap with this film, and like I previously stated, this was the first many horrible films he would make. I didn't enjoy this film and I thought it was overall very stupid with nothing good to offer. Eddie Murphy was once pretty funny, but with films like this, he shows that he has nothing left to deliver in comedy. After this one, he simply became worse. Avoid this film, and watch one his earlier efforts instead. Better yet, watch an actual funny film. If you're looking for a great comedy, this remake sadly doesn't deliver.

I hate remakes, and this movie is no exception. Murphy takes this whole animal talking power too far. It's just not funny at all.