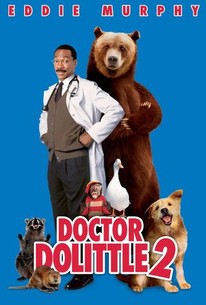 Critics Consensus: Although there are laughs to be had in Dr. Dolittle 2, its preoccupation with toilet humor and Murphy's restrained performance makes this a missed opportunity.

Critics Consensus: Although there are laughs to be had in Dr. Dolittle 2, its preoccupation with toilet humor and Murphy's restrained performance makes this a missed opportunity.

Critic Consensus: Although there are laughs to be had in Dr. Dolittle 2, its preoccupation with toilet humor and Murphy's restrained performance makes this a missed opportunity.

Eddie Murphy returns as a doctor with a gift for talking to animals in this sequel to a box-office blockbuster. Murphy is John Dolittle, who this time around attempts to save an endangered Pacific forest from lumber industry forces by reintegrating an endangered species of bear back into the wild. Unfortunately, Dolittle's candidate is a performing bear (voice of Steve Zahn) with a taste for junk food and no natural skills in the wild. If Dolittle is going to save the species and its habitat, he must get him to mate with a fussy female (Lisa Kudrow) by providing lessons in winning the heart of the opposite sex. Dr. Dolittle's problems are compounded by a local animal work stoppage and furry woodland creatures who have organized their own version of the Mafia. Norm Macdonald returns as the voice of Lucky the Dog, co-starring with Kevin Pollak, Jeffrey Jones, Michael Rapaport, Molly Shannon, Reni Santoni, and Kristen Wilson. ~ Karl Williams, Rovi

Michael Rapaport
as Joey the Raccoon

Andy Dick
as Lennie the Weasel

Cedric the Entertainer
as Zoo Bear

Steve Irwin
as The Crocodile Hunter

Murphy, who was upstaged by the talking animals in the original, brings bite as well as bark to the funnier sequel.

A likeable, sporadically funny movie that will satisfy the less demanding tot.

The kind of film that children may find amusing but their parents will wish that they didn't.

The story is a cute one.

The non-human actors are nothing short of hilarious.

The animals are adorable, the plot simple and the jokes funny. Don't be surprised if your kids want to "talk to the animals", not to mention bring some of them home, after seeing this one!

Often tedious, occasionally cheap looking and always unimaginative, this should certainly put paid to any plans for a third installment. But, this being Hollywood, I wouldn't bank on it.

The script is lackluster and unambitious. Well, lame really. Eddie Murphy is truly the only reason to see DR2.

Delivers an adequate number of laughs at the start and finish, with a noticeable sag in the middle.

It does what it does well enough.

This more civilized Dr. Dolittle may be less zany than he used to be, but at least you can take the kids to see this one.

Funny. But not neccisarily the best of Eddie Murphy's work. A good comedy at best! Not great.

I don't believe that make a continuation.

I actually felt that this sequel was a small improvement on the original!

Not as much good as the Prequel one.