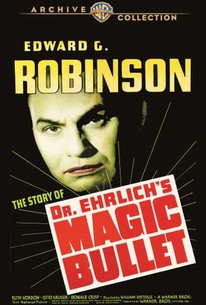 Edward G. Robinson portrays real-life German medical researcher Paul Erlich, the man who discovered and perfected "Formula 606," the cure for syphilis. The world at large would prefer to treat the disease as though it does not exist, so Erlich spends most of his life underfunded and frustrated. A no-nonsense dowager (Maria Ouspenskaya) has faith in Erlich, however, and thus provides the necessary funds to develop Formula 606. Once the serum is released to the public, Erlich's reputation is threatened when a handful of syphilitics die, ostensibly as a result of the "cure." Brought up on criminal charges, Erlich is exonerated by his old colleague Dr. Von Behring (Otto Kruger). Considered daring in its time for its exploration of a "taboo" subject, Dr. Erlich's Magic Bullet holds up as one of Warner Bros.' most solid biopics, with a convincing performance from a nearly unrecognizable Edward G. Robinson.

Rolf Lindau
as Patient
View All

(Robinson's Dr. Ehrlich) accumulates knowledge much like an investigator, for him an oppositional role he'd later take for Wilder in Double Indemnity.

Well made if a tad stodgy bio-pic that has a great performance at it's center by Edward G. Robinson. How is it possible this man was never even nominated for an Academy Award?

An amazing tale of breaking through cultural taboos to do the right thing.