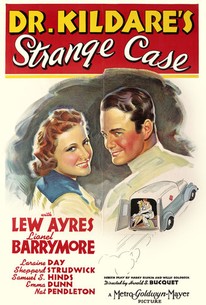 This fourth entry in MGM's "Dr. Kildare" series once again stars Lew Ayres as Kildare, Laraine Day as his sweetheart Mary Lamont, and Lionel Barrymore as crusty Dr. Gillespie. In this outing, surgeon Gregory Lane (Sheppard Strudwick) begins pitching woo at Mary himself, much to Kildare's dismay. But when Lane is accused of incompetence in the wake of an unsuccessful surgery, it is Kildare who proves that his rival is blameless. One of the film's subplots involves an emotionally disturbed patient who is cured via shock therapy-a dubious procedure that held more water in 1940 than it does today. The usual comedy relief is provided by the usual Nat Pendleton and Marie Blake.

This is what's known as "good summer entertainment."

There are no featured reviews for Dr. Kildare's Strange Case at this time.