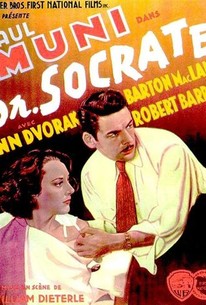 Paul Muni is a prominent physician who is kidnapped by gangsters and forced to tend the needs of head crook Barton MacLaine. MacLaine takes a liking to the intellectual doctor and allows him to go home after his job is done. Muni finds himself the reluctant "staff physician" for the gangster, thus is periodically spirited away from his practice to look after the criminal. He has given his word not to "rat" on the crooks, but he can't sit idly by while the gangsters loot the city. Muni foils the crooks by injecting them with a drug which induces temporary blindness. Dr. Socrates was remade in 1939 as King of the Underworld, with Humphrey Bogart as the gangster boss and actress Kay Francis in Paul Muni's role (with surprisingly few dialogue alterations to accommodate the gender switch!)

Frank Darien
as Sam
View All

Adequately played, of course, by Paul Muni, but this is not much of an assignment for him.

The picture is rather awkwardly directed, with long explanations taking the place of action over the initial stretches.

There are no featured audience reviews yet. Click the link below to see what others say about Dr. Socrates!