Dr. Strangelove Or How I Learned to Stop Worrying and Love the Bomb1964

Dr. Strangelove Or How I Learned to Stop Worrying and Love the Bomb (1964) 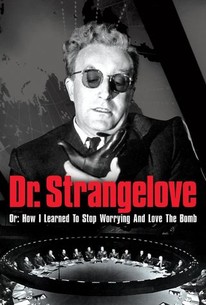 Critics Consensus: Stanley Kubrick's brilliant Cold War satire remains as funny and razor-sharp today as it was in 1964.

Critics Consensus: Stanley Kubrick's brilliant Cold War satire remains as funny and razor-sharp today as it was in 1964.

Critic Consensus: Stanley Kubrick's brilliant Cold War satire remains as funny and razor-sharp today as it was in 1964.

Dr. Strangelove Or How I Learned to Stop Worrying and Love the Bomb Videos

Dr. Strangelove Or How I Learned to Stop Worrying and Love the Bomb Photos

In 1964, with the Cuban Missile Crisis fresh in viewers' minds, the Cold War at its frostiest, and the hydrogen bomb relatively new and frightening, Stanley Kubrick dared to make a film about what could happen if the wrong person pushed the wrong button -- and played the situation for laughs. Dr. Strangelove's jet-black satire (from a script by director Stanley Kubrick, Peter George, and Terry Southern) and a host of superb comic performances (including three from Peter Sellers) have kept the film fresh and entertaining, even as its issues have become (slightly) less timely. Loaded with thermonuclear weapons, a U.S. bomber piloted by Maj. T.J. "King" Kong (Slim Pickens) is on a routine flight pattern near the Soviet Union when they receive orders to commence Wing Attack Plan R, best summarized by Maj. Kong as "Nuclear combat! Toe to toe with the Russkies!" On the ground at Burpleson Air Force Base, Group Capt. Lionel Mandrake (Peter Sellers) notices nothing on the news about America being at war. Gen. Jack D. Ripper (Sterling Hayden) calmly informs him that he gave the command to attack the Soviet Union because it was high time someone did something about fluoridation, which is sapping Americans' bodily fluids (and apparently has something to do with Ripper's sexual dysfunction). Meanwhile, President Merkin Muffley (Sellers again) meets with his top Pentagon advisors, including super-hawk Gen. Buck Turgidson (George C. Scott), who sees this as an opportunity to do something about Communism in general and Russians in particular. However, the ante is upped considerably when Soviet ambassador de Sadesky (Peter Bull) informs Muffley and his staff of the latest innovation in Soviet weapons technology: a "Doomsday Machine" that will destroy the entire world if the Russians are attacked. ~ Mark Deming, Rovi

Paul Tamarin
as Lt. B. Goldberg

Laurence Herder
as Members of the Defense Team

John McCarthy
as Members of the Defense Team

Hal Galili
as Members of the Defense Team
View All

News & Interviews for Dr. Strangelove Or How I Learned to Stop Worrying and Love the Bomb

View All Dr. Strangelove Or How I Learned to Stop Worrying and Love the Bomb News

Critic Reviews for Dr. Strangelove Or How I Learned to Stop Worrying and Love the Bomb

Age has not withered that final queasy nightmare of the mushroom clouds, set to Vera Lynn's hopeful We'll Meet Again - underscoring how the certainties of the second world war ceased to hold their meaning in the nuclear age.

Nothing would seen to be farther apart than nuclear war and comedy, yet Kubrick's caper eloquently tackles a Fail-Safe subject with a light touch.

Kubrick has shown before that he is a director of rare gifts. Dr. Strangelove brings them into full realization.

Of the many films considered great satire, only Dr. Strangelove holds up as a masterpiece with none of its bite removed.

By a whopping margin, this is Kubrick's most radical film and greatest dramatic gamble.

Probably Kubrick's biggest gamble, resulted in a classic that has aged finely. [Full review in Spanish]

Few satires are stranger or sharper, and there are few funnier films that come from a weirder and braver starting point than Dr Strangelove.

I think this is a film I will need to see again especially for the Sellars performances. But I really hope the opening scroll is correct and nothing like this can ever actually happen.

While still politically relevant, the Cold War audiences of the '60s were better primed to welcome the irony.

Dr. Strangelove is one of [Stanley Kubrick's] very best movies.

Stanley Kubrick's classic black comedy, Dr. Strangelove or: How I Learned to Stop Worrying and Love the Bomb, remains a genius political satire.

Danielle Solzman
Solzy at the Movies
View All Critic Reviews (93)

Audience Reviews for Dr. Strangelove Or How I Learned to Stop Worrying and Love the Bomb

The one problem I have with this film is that for a film called "Dr. Strangelove or how I learned to stop worrying and love the bomb" Dr. Strangelove isn't in this movie for more than 10 minutes, which was a bit disappointing to me, but the comedy and the acting save the film from falling into obscurity. Geeorge C. Scott and Peter Sellers both do great jobs, Scott is great as the general and Peter Sellers is great as the president, Dr. Strangelove, and the assistant to one of the generals in the film, but to me the funniest part he does in this film is Strangelove, even though he is in the film for only 10 minutes, but the accent for the character is very funny, and how he acts is also very funny. One interesting thing I have to say about the film is that this was James Earl Jones first film, and he was given credit at the beginning of the film as one of the main actors. I haven't seen any of Kubricks other films but after seeing this one, I'd like to see more of them.

Dr Strangelove is part of the vast collection of Stanley Kubrick's greatest films, and goes down, as the greatest film about the cold war and nuclear scare, which the world has ever seen, combining comedy and a real fright perfectly. Strangelove, or, "How I learned to stop worrying and love the bomb", tells the story of what could happen if the US nuclear programme went wrong. Based around the fears of many Americans, and much of the Western World, at the height of the cold war, a US air force general, who is the only one who has the codes to launch and bring back a fleet of planes carrying nuclear weapons, goes mad, and orders his entire fleet to attack the Soviet Union. As the story unfolds we see the pure exceptional talents of Sellers in three characters, the bumbling British RAF pilot, Lionel Mandrake, the worried and hysterical US President, and the former, (perhaps still), Nazi weapon specialist, Dr Strangelove. Through each of these characters, alongside marvellous acting from George C. Scott and Peter Bull, we see the fleet of H-Bombs draw closer to the USSR from four different perspectives, as the possibility of a nuclear war draws ever closer. Released to cinemas just a year after the Cuban Missile Crisis, where the world came closer to nuclear war than ever before, Kubrick, in all his wit and talent, took a very real possibility, exposing the weaknesses of the safeguards of nuclear warfare, and made audiences laugh with joy, despite the fact the event could have happened just later that afternoon. With Peter Sellers, George C. Scott, and the direction of Stanley Kubrick, the film makes for an incredibly entertaining ride, where we are taken along with each of the characters, and allowing us to look right into the weaknesses of the nuclear programme. The acting of each and every character is purely fantastic, and a quality which most people would find hard to top. The cinematography, in the style of a documentary like handheld camera, adds to the realism, whilst at the same time, adding to the ridiculous and humorous connotations of a nuclear war breaking out. The script, based on a serious novel called Red Alert, was adapted perfectly for the funny and sharp style Kubrick was aiming for, balancing moments of serious action and tension, with the laugh out loud moments following straight after. It is hard not to laugh at the fantastic film which Kubrick has produced. Whilst it may be more than 50 years old, and the cold war has come to an end many years ago, Dr Strangelove still impacts on audiences today, in the same way it did in 1964. A fantastically funny, brilliantly acted, and exceptionally directed story, which only the master team of Sellers, Scott and Kubrick could achieve.

I never would have thought that such a simple story and such simple situations could turn into such a loveable film. As the military plans nuclear war it's almost as if the cameras have been placed around the board of directors as the plan attacks. The conversations are so well plotted out that it seemed as though I was watching a documentary in moments. I haven't seen that many war films, and although this is less of a man-to-man combat sort of war film and more of a dialogue driven plan execution with extremely intense character motifs throughout, I think that's why I enjoyed it so much. It's a basic film with a lot of effort and I strongly comment Kubrick for that! "Dr. Strangelove" is a great class film!

Dr. Strangelove is a brilliant satire that pokes fun at the bomb scare and is still amusing by today's standards.

Dr. Strangelove Or How I Learned to Stop Worrying and Love the Bomb Quotes