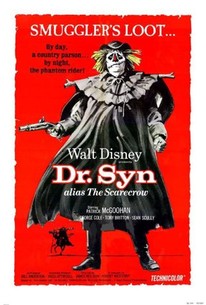 This Disney drama, originally broadcast as a three-part TV episode, tells the story of a vicar's double life. Outwardly, he is the model of upstanding citizenship and loyalty to an oppressive British government. But he is also a notorious smuggler who uses his ill-gotten gains to benefit his impoverished village.

Elsie Wagstaff
as Grandmother
View All

Batman could learn a thing or two from Dr. Syn.