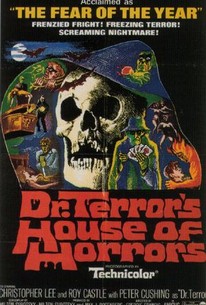 Not to be confused with David Hewitt's abominable Dr. Terror's Gallery of Horrors (AKA The Blood Suckers), this clever horror omnibus is one of the better early anthologies from Amicus Productions, thanks to Freddie Francis' stylish direction and a tongue-in-cheek approach from writer Milton Subotsky (who would later apply the same sardonic treatment to the EC Comics-based productions Tales from the Crypt and The Vault of Horror). The framing story is set in a train car, where five passengers have their fortunes told by the all-seeing Dr. Schreck (Peter Cushing), who refers to his ominous tarot deck as his "House of Horrors." Their respective stories involve all manner of occult happenings: a jazz musician's involvement with a voodoo curse; an estate haunted by a werewolf; a doctor (Donald Sutherland) who suspects that his wife has become a vampire; a cottage besieged by a monster kudzu vine; and the most entertaining segment, in which arrogant art critic Christopher Lee is avidly pursued by a snubbed artist's severed hand. In the end, it doesn't take a jaded horror buff to deduce Schreck's true identity or the ultimate destination of the train passengers, but it's a fun ride nonetheless. Not all of the stories work (the vampire story's "twist" ending is rather silly, the voodoo tale painfully dated), and the effects are generally sub-par, but Francis keeps the pace snappy throughout, giving the entire film a throwaway, Halloween spook-house feel. Hammer horror fans will certainly find this a keeper on the strength of Cushing and Lee's performances.

Frank Forsyth
as Toastmaster
View All

The very rarest kind of anthology film: one without a weak link.

Uneven portmanteau horror, but when it works, it's very good.

Okay, it's not really a house. It's a train. Even so, it's good, old-fashioned, Hammer-ish, British Horror.