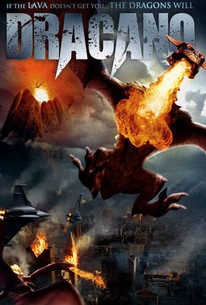 A pair of scientists discovers that dragons are lying dormant in planet Earth's volcanoes, and that it's only a matter of time before mankind faces extinction by a race of creatures thought only to exist in legend. When Mt. Baker in Washington State erupts without warning, carnivorous dragons emerge from the infernal depths, prompting a fierce dogfight with Air Force F-22's and a massive government cover-up. Meanwhile, two scientists (Corin Nemec and Victoria Pratt) and a teenage girl (Mia Faith) learn the truth about the powerful creatures hibernating in volcanoes across the globe, and end up on the run from the ultra-secretive government. Later, when the trio learns that a massive dragon will soon emerge from the depths of Mt. St. Helens, they realize that mankind's days are numbered unless the creature is defeated before it takes flight.

There are no critic reviews yet for Dracano. Keep checking Rotten Tomatoes for updates!

There are no featured audience reviews yet. Click the link below to see what others say about Dracano!