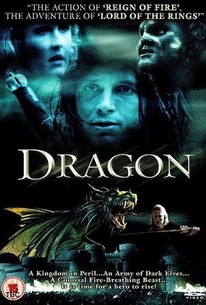 Fantastic, high-flying adventure about a warrior princess (Amelia Jackson-Gray) and her brave band of followers who embark on a a treacherous journey that pits them against evil elves, a wicked sorceress and her flying, fire-breathing creature in an attempt to save a kingdom. Eliza Swenson, who composed the score, and also co-wrote the script with director Leigh Scott. The special effects are outstanding. Jon Paul Gates, Matt Wolf, Rachel Haines, Jason DeParis, Jeff Denton, Jessica Bork.

Eliza Swenson
as Freyja
View All

There are no critic reviews yet for Dragon. Keep checking Rotten Tomatoes for updates!

When you have no budget and want to film a fantasy film this is what you get. At least they used actors with real accents