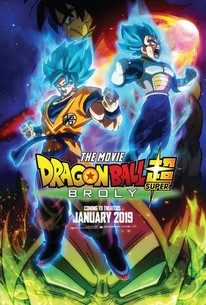 Critics Consensus: Dragon Ball Super: Broly may seem like colorful chaos to newcomers, but for longtime fans, it represents this long-running franchise near its action-packed apogee.

Critics Consensus: Dragon Ball Super: Broly may seem like colorful chaos to newcomers, but for longtime fans, it represents this long-running franchise near its action-packed apogee.

Critic Consensus: Dragon Ball Super: Broly may seem like colorful chaos to newcomers, but for longtime fans, it represents this long-running franchise near its action-packed apogee.

A planet destroyed, a powerful race reduced to nothing. After the devastation of Planet Vegeta, three Saiyans were scattered among the stars, destined for different fates. While two found a home on Earth, the third was raised with a burning desire for vengeance and developed an unbelievable power. And the time for revenge has come. Destinies collide in a battle that will shake the universe to its very core!

Bin Shimada
as Broly
View All

In the end Dragon Ball Super: Broly gave me something of a tiny headache.

The final scenes are so obviously open-ended, and fraught with promises of things to come, that the filmmakers might as well have concluded with a title card: "Stay tuned for our next exciting episode."

This is easily the best Dragon Ball movie ever made.

"Broly" delivers exactly what "Dragon Ball" fans want from a feature; newcomers may find themselves lost in places.

The Broly movie may have the most fast-paced action of any Dragon Ball film to date, and that alone is worth the price of admission.

There are no signposts here, and every time you think you might be getting thrown a narrative bone, forget it.

Toei's ideal business excuse to insert Broly and Gogeta in the original Toriyama continuity. It looks like another boring episode of Dragon Ball Super. [Full review in Spanish]

A great pass time for fans of the saga. [Full Review in Spanish]

If you're a Dragon Ball fan, you're going to love this film...if you're a casual fan, or not a fan, I would say that there are a lot of things left unsaid and you'll feel a little bit lost.

I never expected to walk out of a Dragon Ball movie with an emotional connection to a Saiyan fighter, but DBS: Broly truly punches in a whole new way.

It's impressive that Toriyama's work continues to gain new fans... It's a shame he's not willing to take more risks. [Full Review in Spanish]

There are no featured audience reviews yet. Click the link below to see what others say about Dragon Ball Super: Broly!