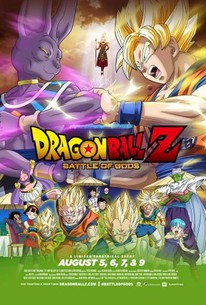 Following the events from the Dragon Ball Z television series, after the defeat of Majin Buu, a new power awakens and threatens humanity. Beerus, an ancient and powerful God of Destruction, searches for Goku after hearing rumors of the Saiyan warrior who defeated Frieza. Realizing the threat Beerus poses to their home planet, the Z-fighters must find a way to stop him before it's too late. Only Goku, humanity's last hope, can ascend to the level of a legendary Super Saiyan God and stop Beerus from destroying Earth, and possibly the entire universe! Fans of the series will be delighted to know that Battle of Gods is an original work from Dragon Ball creator, himself, Akira Toriyama.

Thankfully, the Japanese continue to make traditional hand-drawn animation, digitized in color and partially- enhanced with CG. With Battle of Gods, it's a seamless blend, and entertains as any CG-animated film.

"Battle of Gods" delivers not only the familiar look but also the slapstick comedy, character interaction and over-the-top martial arts fights that "Dragon Ball" fans want and expect.

The fight scenes in Dragon Ball Z: Battle of Gods are tremendous. Each punch and kick has a great sense of power behind it, and the way the camera swerves and glides in new 3D angles makes each battle exhilarating.

Obviously the action is flawless, lending itself impeccably to the modern animation style, and it certainly doesn't hurt that the film is canon.

For all its little hiccups, it was a perfect return to the franchise. In the nearly two decades since DBZ ended, animation had improved drastically, leading to flawless-looking fight sequences.

Even if you enjoy this bizarre deconstruction of one of the world's most popular anime, you still have to sit through a great deal of nonsense to get there.

A mix of rumbustious martial-arts action and knockabout comedy wrapped in crude but colourful animation.

This is undoubtedly the weirdest Dragon Ball Z story I've ever seen and that's really saying something.

Hands down the best DBZ movie ever made!! Fans will not be disappointed and it was such a treat seeing this in a big movie theater.