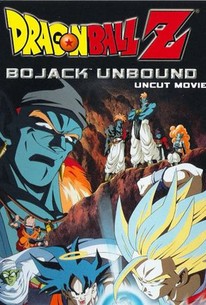 When word gets out that notorious millionaire X.S. Cash is funding a tournament in which contenders do battle with representatives from all four corners of the universe, the fight to become the ultimate champ is on. As the tournament commences, it is soon revealed that scheming menace Bojack has escaped his confines to lead a group of criminals in hijacking the competition with the evil intent to conquer the universe! With Goku out of commission, it's up to young Gohan to summon the strength to defeat Bojack and his gang of miscreants before the entire solar system is thrown into darkness and turmoil.

There are no critic reviews yet for Dragon Ball Z: Bojack Unbound. Keep checking Rotten Tomatoes for updates!

Usually the movies play fast and loose with the DBZ continuity, but this is one of the few that can perfectly fit within shows timeline. It is refreshing to see Gohan be the hero of the story and each of the Z fighters is given fair amounts of screen time. Despite a largely unremarkable villain, the good action and great animation make this entry a must for DBZ fans.

This is one of the best Dragon Ball Z feature movies ever made, much better than the Dragon Ball Z: Lord Slug. It's got a lot of fighting as well as humor, a great plot, and the villain's pretty cool too. And best of all, it fits perfectly into the DBZ storyline. The animation is great. The battle scenes are awesome. This is a must have DBZ collection item.