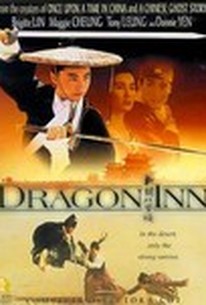 Raymond Lee Wai-man remakes King Hu's 1966 masterpiece about revenge and intrigue between imperial eunuchs during the Ming Dynasty. At the film's outset, the villainous Eunuch Tsao (Donnie Yen Chi-tan) has assassinated one of his primary court rivals and is looking to take out his former rival's right-hand man Chow Wai-on (Tony Leung Kar-fai). Tsao orders that his rival's children be exiled, hoping that Chow will try to rescue them. Instead, Chow's lover Yau Mo-yin (Brigitte Lin Ching-hsia), along with her small band of fighters, saves the children and takes to a desolate tavern called the Dragon Inn, run by the sexy, but wily, Jade (Maggie Cheung man-yuk). Chow soon catches up with Yau at the Inn, catching the eye of Jade. Before the two can move the children to a more secure location, Tsao's henchman pay them an unwelcome visit. While the two sides maneuver, Jade plays both sides of the fence. ~ Jonathan Crow, Rovi

Director King Hu makes kinetic use of the widescreen frame: the action is dominated by gonzo knife throwing, and arrow fire has seldom felt so lethal.

This epic action-martial arts is technically superb, with bouts of expertly choreographed swordplay and Maggie Cheung is so funny as one of the best Hong Kong's talented actresses. Every movement is "balletic" in the sense of being graceful and streaming. The inclusion of "traditional period-piece music" in the scenes was euphonic. The special effects were dazzling. The cast is indeed talented, how many people out there can actually do both acting and being athletic.

This was supposed to be a big hit at the Sundance Festival, not sure why. It was very hard to keep up with as it seemed that scene would change for no reason. Best part of the movie was the end, Special effects were good in last swordfight when guy came out of the ground. But its Asia so it will enter my collection. Its worth the watch, just not as good as the Series Seven Swordsman, I am spoiled I guess