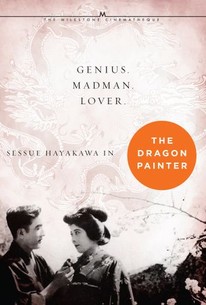 This was one of Sessue Hayakawa's more unusual films. His character, Tatsu, is a brilliant but half-mad artist who lives in the mountains and is constantly searching for his soul mate, whom he calls his "dragon princess." He finds her in the city -- she is Ume Ko (Tsuru Aoki, Hayakawa's real-life wife), the daughter of master painter Kano Indara (Edward Peil). Indara's one regret is that he never had a son to succeed him and Tatsu answers this unfulfilled wish. But after he and Ume are married, Tatsu looses his ambition and genius. Ume feels that their happiness is the cause of this, so she goes away. Tatsu believes she has committed suicide and is distraught. But he has a vision that his dragon princess tells him he must carry on with his art, so he does. Then he finds out that Ume is not dead, and when he hears the reason she left, they are gladly reunited.

Critic Reviews for The Dragon Painter

[Hayakawa] has the power, above anyone I know, to project those stories upon the screen amid the most ideally suitable and beautiful settings... he does this by some magic means which enhances the spectator's feeling for the drama.

It is a screen telling of a tale that is full of heart interest and pathos, with a twist at the end that relives the heavy tragedy that has hung over the story for about two reels.

A simple story of great beauty and appeal, The Dragon Painter is distinguished by... striking photographic studies and gorgeous settings.

The film is compelling for its mythic underpinnings and Hayakawa's sensitive performance.

At just under an hour, The Dragon Painter is too spare and short to be much more than a quaint fable. Still, Hayakawa is never less than magnetic, whether he's sketching by a waterfall or mingling awkwardly in society circles.

It is art in acting; art in photography; art in direction; art in subtitle. It is as exquisite and complete a thing as I have ever seen on the screen.

The role of Tatsu, the mad artist, affords [Hayakawa] a totally different type of character to portray than any he has attempted. His conception of the part is inherently artistic.

The story is original in character, supplying a wealth of romanticism. Its screen development at times lacks sufficient incident to accelerate the action. The production is high class, clean of moral and beautiful in conception.

We can only give the production the highest praise.

They had an idea here all right and Bill Worthington has given a remarkably artistic atmospheric background but they failed to provide enough story incident and so it misses.

Even the greatest of silent film enthusiasts will be hard pressed to recommend it...

For social significance, if not artistic depth, the film deserves a contemporary audience.

Audience Reviews for The Dragon Painter

"The Dragon Painter" is a mesmerizing and tragically moving silent film about the obsessiveness and singlemindedness of artists, whose work often requires sacrifice.(Oh and be careful what you ask for. You might just get it.) Take Kano Indara(Edward Peil), for example. He is nearing the end of his days, wealthy in Tokyo, but sad that he does not have an heir to continue his work and unable to find a worthy successor, despite having a grown daughter, Ume-Ko(Tsuru Aoki). One day, his friend Uchida(Toyo Fujita), a surveyor, has a run in with Tatsu(Sessue Hayakawa), a supremely talented, if possibly mentally unbalanced painter who is convinced that his one true lady love has been trapped in the form of a dragon for the past thousand years and feels compelled to paint her day and night. Kino Indara is impressed with his artwork and invites him to his home, using his daughter as bait.

Interesting story about a talented artist who loses his talent when he gets married. She then fakes her death and his talent comes back. Now thats love!