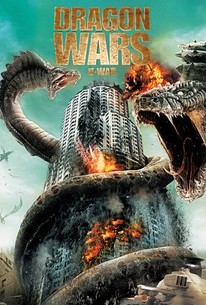 Korean director Shim Hyung-Rae's monster movie D-War begins with a lengthy prologue, in which an antique dealer named Jack (Robert Forster) watches a young patron, Ethan Kendrick (Cody Erens) get zapped with a force emanating from a chest in his shop. Realizing the significance of this event, Jack bequeaths a medal to the boy, and speaks candidly to him of mystical events that transpired a half-millennium earlier. In a bygone era, it seems, giant creatures called Buraki roamed the land, morphing from serpents into dragons and back again, and equipped with a massive army of formidable creatures. An ancient warrior-apprentice saved the life of his beloved from these monstrosities; the warrior's spirit was eventually contained in the aforementioned chest, and it has now filled Ethan. Jack gives Ethan an enchanted red pendant and advises him to see out the contemporary incarnation of the ancient warrior's intended, who can be recognized via a red dragon tattoo on her shoulder. When the woman reaches her 20th birthday, it seems, she and Ethan - joining forces - will be able to reincarnate Imoogi as dragons. That woman is in fact Sarah (Amanda Brooks); she and Ethan do encounter one another, but it isn't long before the Buraki serpent and all of his enormous minions resurface and decide to lay waste to the City of Angels, worming their way through the town as they look for the chosen pair. ~ Nathan Southern, Rovi

Kevin Breznahan
as Reporter
View All

It is such a breathless, delirious stew, it's impossible not to be entertained, provided -- this is crucial -- you have a sense of humor.

When they decide to sic [those monsters] on downtown Los Angeles, the movie turns shockingly watchable. Until that sequence, there was no evidence that anybody involved with this laughable fantasy knew what he or she was doing.

The rampaging-monsters flick Dragon Wars loudly speaks the universal language of effects-laden mayhem. Unfortunately, it is also fluent in the laughable dialogue of a million bad fantasy flicks.

The only winners in Dragon Wars are the computer-imaging geeks who must have logged tons of overtime. The rest of the world is left scratching its head at a monster epic so dismal that it doesn't even register as a guilty pleasure.

Dragon Wars isn't just bad, it's an outright bomb, and the best thing that could happen is for the whole film to just slither back underneath the rock from which it nauseatingly came out from.

This monster film makes even the remake of Godzilla look good.

D-War is a complete waste of time that shouldn't be watched by anyone, for any reason.

It's the ultimate matinée film, and to me (as a non-Korean) it never seemed to try and make like it was anything else.

The film didn't promise anything more than it delivered.

DRAGON WARS knows it's dumb, and just has fun. It's my new guilty pleasure!

By no reasonable reckoning can the film be considered a competent piece of cinematic storytelling, yet somehow the movie transcends its silly screenplay with over-the-top action and visually imaginative battles.

A movie without a single redeeming quality that we highly recommend.

Well its not that bad come on, a cross of 'Star Wars', 'Godzilla', 'king kong', 'Jurassic Park' and all other monster flicks ever hehe. The effects are alright, very good for Korea but less so for Hollywood, but they still look fairly good, the only real problem is when people are bluescreened against the action, then its obvious. The plot, like allot of Eastern movies, its confusing, with lots of odd names, sorcerers, magic and creatures running around, you lose it big time. The acting is slightly below average but you can live with it, the main claim to fame here is an awesome monster battle between US soldiers, dragons and all manner of warriors with weird weapons, including a pretty good 'Star Wars' style Apache choppers vs flying dragons through a skyscraper trenches section, probably the best part. On the whole I quite liked it, its fun stuff and actually beats 'Reign of Fire' thats for sure.

Dragon Wars is considered the most anticipated film in the history of korean cinema. It's worth seeing for whats there on the screen in front of you. The effects and the movement of the dragons are mind boggling and the surrounding backgrounds of the film are good to look at. The problem with it however that will dissapoint most is the acting and the very very bad script. I did however enjoy the appearence of the actor from the TV Series "Mike and Molly" as a zookeeper. I didn't like it but I didn't hate the film either.

If you go back to 2007 there was this really big line up for a new film getting promoted in my country and was made there called D-War. And director Hyung-rae Shim blockbuster was being promoted everywhere. If you're not quite familiar it is a film that appeals to our nationalism and culture and it cost a stuttering more than $70 million, and my first thoughts where "Don't be Crap" And with the mixed to very negative reviews I was reading I still had hope... And of course I was it opening day like so many and walk out hunted by what I saw. So just because it was made to succeed in my country or even America doesn't make it good... In a matter of fact it was even worse. One tends to always think our country was positive on this... No we weren't at all. If anything 45 million other people thought the same thing. Look how about I just pan out the film for you... Awful acting from our American cast (That occupies the whole film). A horrible story that in same way might not even have anything to do with the legends I was told when I was young. Though impressive Ground breaking Special Effects that can't make up for this plain awful fucking film.

Directed by Shim Hyung-rae and Starring Jason Behr, Amanda Brooks, Robert Forster, Chris Mulkey and Elizabeth Peña. Indeed Korean Mythology is fascinating I have read books on their culture and beliefs and it is some amazing stuff if you can find the write stories and books. And Dragon Wars plays like a homepage to major elements of this or there legends but is it just me or is this film just bad? I mean this could have been an amazing movie but there is just so much unfocused stuff and things that trail off into nothing. And the amazing fact is that they set it in America and not Korea? The only thing that saved this movie were the amazing special effects, and some major creature designs of their culture. [IMG]http://i54.tinypic.com/255niqg.jpg[/IMG] Based on the Korean legend, unknown creatures will return and devastate the planet. Reporter Ethan Kendrick is called in to investigate the matter, and he arrives at the conclusion that a girl, stricken with a mysterious illness, named Sarah is supposed to help him. The Imoogi makes its way to Los Angeles, wreaking havoc and destruction. And it will be the start of a massive climax to end this legend. Personally I hated the story it is 100% unfaithful to the legends and how they have placed the setting in Los Angeles and only a brief moment in Korea. It should be Korea and it should have Korean actors for a Korean film. Also despite it being Terrible it was a big hit in Korea landing in there highest grossing films of all time. [IMG]http://i54.tinypic.com/aelfew.jpg[/IMG] 20% for story: I liked the ending scene at the massive temple with the fight but that's about it. The movie is just annoying because of its modern day setting which just really pisses me off. I have no doubt that Koreans would have liked it. 15% for Acting: it's terrible and even bad attempt at humour which just isn't funny at all, our leads are good but overall it's just terrible. Its funny how they or most would even try. 30% for characters: Indeed there interesting but overall still bad only because there American and annoying. Again Koreans might have made the film interesting. 90% for special effects: This movie cost around $75 million dollars in American Money or $69 billion won (South Korean money). Making it the highest budgeted film for the time, to bad the amazing effects were the only good part. 39% for everything else: Some amazing music but that's it and some epic creature designs but that's it. Alothought its better then his first film Reptillian big time but Is it worth anyones time? I say read the books not watch the movie you will only be pissed off big time. Keiko's score 24-100