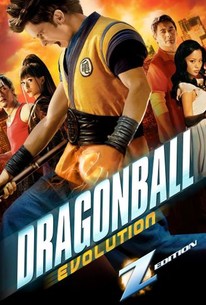 Critics Consensus: Executed with little panache or invention, Dragonball Evolution lacks the magic that made the books upon which it was based a cult sensation.

Critics Consensus: Executed with little panache or invention, Dragonball Evolution lacks the magic that made the books upon which it was based a cult sensation.

Critic Consensus: Executed with little panache or invention, Dragonball Evolution lacks the magic that made the books upon which it was based a cult sensation.

Jon Valera
as Moreno
View All

Dragonball: Evolution is my least-favorite film of all time. I hate it with every fiber of my being. If you were ever curious about the show Dragon Ball or the manga... please, avoid this cinematic disaster at all costs.

A rather tame live-action sci-fi flick.

The producer, Stephen Chow, made the funny and original Kung Fu Hustle, but here he and director James Wong get into a terrible mess.

No, its unforgivable flaw is that it is boring, and the only emotion I could work up after exiting the theater was a yawn.

Evolution is far more entertaining than it deserves to be, unless you're a 10-year-old boy, in which case it's only the greatest movie ever made.

They clearly didn't know what they were doing, terrible. But hey, they made their money back? ... and I do like the movies, this was just really really dumb...

There are balls of lint smarter than Dragonball Evolution.

There are fewer depressing sights than Chow Yun-Fat performing stilted wire-fu in a Hawaiian shirt.

This film offers further proof, as if any were needed, that Western filmmakers cannot do justice to their Eastern counterparts when it comes to retooling anime and/or Fant-Asia for Occidental consumption.

More concerned with recruiting the testosterone troubled boys of today than it is rewarding fans of yesteryear.

Turned a classic tale of innocence, the struggle between good and evil, into a hollywood CGI fuck fest of stupidity. There are so many things wrong with this film even outside of the fact that it bastardized the source material. Easily worse movie I have ever seen.

Oh gosh. The trailers were better.

I must say that this one is a really terrible adaptation, maybe basically it wasn't an adaptation movie, but it was a movie inspired from the manga because the only same thing about this movie was the name of the characters and the Dragon Ball itself... If I see this movie as not an adaptation movie, I may gave it 2 or 2 1/2 stars because it was pretty entertaining... But because this one is an adaptation movie, I couldn't gave more than 1 1/2 stars... James Wong really changed a lot from the manga, and it was terrible because I'm a big fan of the manga... Yet, he made a lot of bloopers because of the weak script they have here, that one makes the audience become more confused with the story here... Very disappointing...