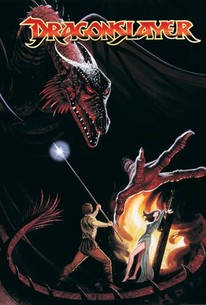 When Princess Elspeth (Chloe Salaman) is scheduled to be the next sacrificial virgin to a deadly dragon, it is up to an aged wizard, Ulrich (Ralph Richardson) and his young, headstrong apprentice, Galen (Peter MacNicol), to defeat the serpent and save the beautiful princess.

Chris Twinn
as Urlander
View All

This movie has two big things going for it -- the dragon and the man who masterminds its slaying.

An unknown treasure of a fantasy film and well worth a look for fans of the genre.

The film excels as a visual exercise, as a study in adolescent psychology, and even as astute political analysis.

Vintage fantasy epic is great, despite a too-graphic death.

Verges on the nasty for the nippers; sails close to déjà vu for fantasy fans; fated, probably, to damnation by faint praise.

As much of a triumph as this creature is, Vermithrax can't carry the entire picture. No creature can, and it is the lapses in the human part of the equation that prevent Dragonslayer from being the picture it might have been.

...a quite unconventional story, with lots of kinks that make it anything but Disney in outlook...

The action isn't consistent or frequent enough, while the humor and the romance subplot aren't strong enough to make up for the downtime.

If there was one film from the 1970s/80s early heyday of fantasy films that perfectly straddled the divide between kiddie movies and gorefests, it was Dragonslayer.

It is a lively, fun, suspenseful, beautiful medieval romance what Excalibur tried to be, should have been, and wasn't.

A really solid fun fantasy story that I think holds up quite well.

Yep back in 1981 Disney were in cahoots with Paramount and the result was this quite dark film. I mean how much more badass could this idea be?! a sorcerers apprentice must come to grips with his powers, learn his trade and save the land from a 400 year old dragon whilst trying to fend off a pesky knight of the realm. Basically its just an excuse for some dragon battling in a time honoured Tolkien way. I haven't seen this film since I was a little kiddie, long before the days of knowing what 'The Lord of the Rings' was anyway. First impressions are how Tolkien-like the visuals actually are. It was all filmed in the wilderness of Wales and the Isle of Skye and it really looks tremendous. The sweeping lush valleys, the green woodlands, the rocky mountainous dragons lair, wide misty lakes and typically traditional old fashioned dank medieval castles. It all looks so damn good visually it doesn't actually look like Wales or the Isle of Skye, it looks too nice!. Some sequences could of been cut out of Ridley Scotts 'Legend', it has that fairy fantasy vibe at times, you half expect some Elves or Dwarf warriors to turn up. Admittedly for a kick ass title like this the film takes it time in delivering some dragon slaying. Most of the time we see the rather odd choice of hero in Peter MacNicol arguing with the King, arguing with the Kings main knight who wears a silly helmet, looking perplexed, attempting magic, getting locked up and finding out that a young boy is actually a young woman. How in the hell he couldn't see this I don't know. The plot about the King holding a lottery that chooses young girls to be sacrificed to the dragon to appease it is pure fairytale stuff (this is why that one woman disguises herself as a bloke). The Princess finds out her father the King has rigged it so she never gets chosen, so she bravely opts to get sacrificed. Somehow the King can't stop this decision even though he's King so its up to MacNicol to save her. Really the whole crux of the film is the last half where MacNicol must fight the dragon with his big dragon slaying spear, his magic shiny ring which he got from his sorcerer Master and dragon scale shield. Its the effects that make this film stand up and get counted, for the time the effects were mind blowing and they ain't half bad now. A classical mix of stop motion, puppets, large scale puppets, bluescreen and some matte paintings bring the dragon to life. I can't deny the visuals do get a bit creaky as the film progresses through to the big confrontation. Bluescreen becomes very obvious, especially against the stop motion dragon, the flying sequences are a bit iffy looking and the stop motion isn't quite as good as I remembered. Its the puppets and large scale dragon heads that take your breathe away, some really nice detail and great fire breathing effects...even if the dragon design is a bit standard and unadventurous. The other thing that hit me was the level of shock factor in this film. We do see poor old Ian McDiarmid get incinerated up close, we do see the Princess get half eaten by baby dragon puppets, one has its mouthful with her foot!, there is a haunting sequence where a young girl gets torched alive (you hear her screams) and we do see someone getting run through with a spear. In short there is a reasonable amount of blood on show here! I was surprised. Its quite a slow film with a lot of character building which is a tad dull but it works. The whole plot to kill the dragon does seem pretty convoluted really, they're messing around with magic rings, spells, resurrection blah blah blah when all you wanna see is MacNicol hack at the dragon with a large sharp weapon. End of the day they kill it with a remotely detonated old sorcerer via the magic ring it seems, kinda made me think why we had to go through everything just to do that. But I guess the old sorcerer had to die to come back as a magical explosive old sorcerer resurrected from the dragons fiery underground lake...whatever. The film appears to be your bog standard fantasy film where the hero must save the Princess from the dragon, but it isn't, the Princess gets eaten!. The plot also feels a bit heavy at times, a bit bloated with magic when really you just wanna see a bit more kickassery, I guess in this day and age a remake would give you that for sure. I can't moan about the plot as it is well done and offers more than just hack n slash, the characters are all pretty good really which isn't expected. This is a fantasy so you half expect high levels of flaming grilled cheese but no, everyone plays it straight and it works well, I especially liked the portrayal and look of 'King Casiodorus'. So no this isn't entirely a silly childish fairytale story, far from it. The visuals may trick you into thinking this at times but its quite a bleak film mostly. For me I just wanted to watch it again for the dragon sequences, there I said it, I'm sure most would be the same truth be told. In that sense the film doesn't disappoint, despite its age the film offers some great draconem action, and yes I did feel sorry for the dragon when its babies got slain by the hero pfft! screw you hero!.

This is one of the earliest fantasy films that dared to present a dragon and actually managed to pull it off. The story of the mage apprentice who has to step up to protect a realm from the fire-spitting monster is rather simplistic and we learn very little about the characters that inhibit it. The film still has a very unique and somewhat disconcerting atmosphere, which makes up for a lot. It's also smart enough to hide the dragon from our sights for the longest time. Once it enters the scene, it's pretty damn convincing even by today's standards. Even though the plot is far from generic and always keeps you uncertain about what's happening next, the movie does not manage to grip you entirely. Especially by today's standards it feels aged. The dragon is still impressive, though.

This is not as terrible a film as I originally believed it to be. Actually I never really thought it was that terrible at all, but I may have been being a bit generous just because I enjoy these kinds of movies. The pace of the film is incredibly slow and lacks any sort leading character or protagonist for the audience to relate to or have things explained for them. Not all films need this sort of thing, but in a film like this, it's absolutely necessary. The effects work is fantastic and the story is pretty good, but it creeps along without a proper focus. The gore peppered throughout the film is also a bit jarring. Now, I like gore, but it feels out of character for what the filmmakers were trying to achieve with this. It tries to play things realistically and just let the gore be the gore, but it doesn't work well within the confines of a PG-rated environment. Personally, I enjoy it, but it is problematical, and contains definite allusions to J.R.R. Tolkien - intentional or not. :)

A predictable, old story about having to slay a dragon, nothing new. It is exciting, though, and somewhat humorous. Overall, it's okay.