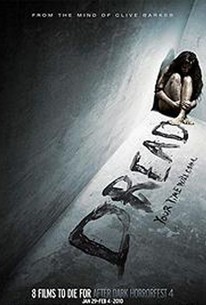 Three college students producing a documentary on the true nature of fear are slowly drawn into a world of nightmares when one member of the group begins exploiting the phobias of his fellow participants in hopes of seeking salvation from his own dark obsession. Shaun Evans, Jackson Rathbone, Hanne Steen, and Laura Donnelly star in a film from writer/director Anthony Diblasi. Based on an original short story by horror icon Clive Barker.

Carl McCrystal
as The Ax Man

Elissa Dowling
as Tamsin
View All

a twisted psychological thriller that combines the phobic focus of Fearless (1993), the discomfiting reflexivity of Peeping Tom (1960), and the abhorrent torments of Seed (2007).

Completely missing the point of the Clive Barker short story, Dread occasionally shows moments of promise but the psychological elements are completely glossed over in favour of gore and torture. Not that there's anything wrong with that per se, but because Dread lacks a proper set up (not to mention the most interesting characters are not given enough development), its final act is confusing and not as disturbing as it wants to be.

I seem to be a bit of a fan of After Dark Films...the Independent horror film company. They had a festival here in Chicago, and I attended several movies of theirs during that. I enjoyed them. Some immensely. This film was very intriguing, but things don't really start developing until half way through. When they do, however, I was mesmerized, disgusted, and truly intrigued. Good job...NOT for Hollywood big budget lovers, though. Definitely Independent film quality...

I went into this film quite dubious of the cast but was pleasantly surprised by the acting capabilities and uniquely unsettling characteristics of most of the cast. Although it is slow at times and is not what I would technically define as "horror" it played out nicely and gave the viewer all that they would hope to gain from such a film. I liked it especially because it did not follow a stereotypical "modern" horror movie pace, instead opting to take its time to allow you to bond with the characters so it made the events that unfolded and the things inflicted upon them so much more morish.

Dread is about a university student and philosophy major, Stephen, who meets a very peculiar student named Quaid. Quaid suggests to Stephen that he and himself should make a documentary about what people dread in life. Along with their bud Cheryl, they start interviewing students, but none seem right to Quaid, who is looking for a bit more trauma than just a fear. And when some expose some of their own personal dread, Quaid decides he wants to make them go through their fears like he did when he saw his parents getting murdered by an ax-wielding maniac at a very young age. Dread is a film-adaptation of a Clive Barker short story with the same name. The story was included in the short story collection, "Books of Blood." And while the story isn't my favorite Clive Barker story, the film is a very good adaptation (which is hard to do with Clive Barker stories). It's written and directed by Anthony DiBlasi, who also co-produced some other Clive Barker adaptations (Midnight Meat Train, Books of Blood). He really understands the content of the story and knows what to do with Clive Barker adaptations. The acting in this is also very well done. You have Jackson Rathbone, who you may remember from the Twilight Saga plays the part of Stephen. He shines because we buy him as a normal protagonist who's been thrust upon a bad situation (or maybe a bad person) and he does a great part playing the part. You also have Shaun Evans, who plays the part of Quaid. It's a really good horror film when an actor plays a villain who you don't want to win, but you're excited to find out what he does next. What really stands out about this film, though, is the 3rd act, which is brutal and ruthless. It's one that you don't see coming, even though you're expecting something to happen from Quaid. And the ending is something that?..well, I can't really talk about without spoiling what it really is. But, let's just say, it's not a fairy-tale ending (but were you really expecting that) and it's something also that you don't see coming.Dark, brutal, and twisted. I love it.