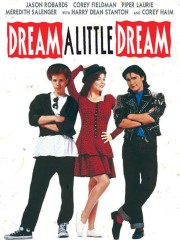 Steve M
November 30, 2018
This movie is highly underrated. I have watched it at least 50 times in my life amd it still speaks volumes to me. Truly one of the best performances of the Coreys.

August 31, 2018
I love this movie. I watched it with girlfriends when it first came out at the right age, which was about 13, and it was funny and romantic and very quirky. It's been 20 years now, and I've seen it a couple of times since then, and it keeps getting better for me. You have to remember that this was in the context of the MTV decade, when music and faster scene cuts were part of film art. It's dreamlike, which gives it a feeling of being too complex too follow, although the plot is pretty simple (old folks go into young folks - old man becomes dominant mind in boy and pushes him to subconscious - old woman gets pushed into subconscious of girl - hi-jinks ensue). I can understand why people expecting a very linear plot in a typical movie format would be dissatisfied or frustrated with this, but for me each scene, with the help of brilliant music choices, blends together in a seamless meditation on the struggles of youth, the grace of old age, and the love between two people.

Beyond the basic plot structure, there are some deep lessons being explored. The older character's wisdom straightens out many of the problems the teenager is experiencing, showing that most of these problems are self-inflicted through lack of maturity, However, the film doesn't invalidate these struggles and the older character learns to accept that the drama of youth is not only necessary, but a vital part of the human experience. Both youth and old age are connected by the bond of love between two people that can transcend the physical body and its eventual decay.

Finally, Jason Robard and Corey Feldman really hold the screen. They're both magnetic, which was a good choice for a film that loses focus around the edges. It's easy to scratch your head afterwards and puzzle over what happened or how, but while it's happening the emotional arcs of both actors hold your attention and feel complete.

I'm not saying the director Rocco is Fellini, but if Fellini's grandson were around to come of age in the 1980's, and he was trying to make a movie that felt relevant to teens, this movie might be a product. It's fun, not so deep that it takes itself seriously, and held together well by a fantastic cast (Harry Dean Stanton enriches every small scene he's in) and soundtrack.

To use an expression from the move, maybe everyone should just "cut it some slack".

Christopher T
January 12, 2018
I disagree with the critics and alot of the audience review. It is not an unfollowable plot. Anyone familiar with eastern religion or the new age movement knows exactly what is going. On. The fact that most of the critics don't understand it is not proof of bad writing but proof that it is over most people's heads.

Clif T
July 3, 2017
Even re-watching this 20 years latter I still see the near true to life teen interactions from my high school. The lazy critics that blasted this movie for its unknowable plot do not understand the mind and pace of a mid to late 80's high school student. The only thing they did not show was the prominence of weed being smoked.

Rouén R
February 22, 2017
This is a charming bit of fantasy that takes you on a journey of love, sacrifice and knowledge that crosses the generation gap.

Tony P
½ September 27, 2016
Very confusing, but I'm pretty sure it was senseless garbage.

Amy I
July 12, 2016
As a teen, I watched this movie at lest 100 times. it is the most romantic body swap move I have ever seen . it waves a complex story of love in youth inside the mystical. I love the dream space scenes. The sound track always takes me back to those halcyon days of your . Great movie, great memories. the only bad part is that i have always longed for a love that intense and timeless only to discover that type of love only exists in movies

Danny G
July 10, 2016
The plot had its high points, but the real draw is the soundtrack.

Samantha N
April 3, 2016
One of my absolutely favorite movies of the 80's. I have seen this film a thousand times and I still love it!

Shawn W
March 25, 2016
Not the best film from the two Coreys. One of those adult-teen switcheroo films where they change bodies. Feldman gets the top role but Haim has more charisma as a pretty much meaningless support character. Highlight for me was correctly identifying Loverboy's Mike Reno as the singer of a soundtrack song.

Aaron B
February 18, 2016
Is it a classic? For me, yes. For anyone else, it's maybe 2.5 or 3 stars. It's not worthy of 0%. This was a fun movie with good one-liners, and even if Jason Robards phoned it in, the performances were pretty good.

Scott R
February 15, 2016
The critics who rated this film obviously missed the depth and beauty that made this film nothing short of the masterpiece that it is. Dream a Little Dream was a heart warming coming of age story that transcended the vast and seemingly insurmountable generation gap of the late 80s. Rich with pithy alegory, time-tested literary themes, metaphysical & philosophical overtones all wrapped up in a love story for the ages.
With flagship caliber performancs by both Corey's supported by the brilliance that was always delivered by the great thespian, Jason Robards as well as the delightful Meridith Salinger, this film is a perfect balance of drama and comic relief. This movie was by far the best and most underappreciated of the Two Corey's franchise and an absolute treat for anyone who is watching it.

1. you've LOVED this film since it came out around your prepubescence.
2. you saw this film later on, you think it's "weird" & you're probably fascinated at Feldman's King of Pop mimicry

Jonathan M
½ June 8, 2015
It was alright, confusing plot that did not make sense but I found watchable.

Andre L
November 2, 2014
This movie is one of the 80's quintisentials. Dream within a dream, cocaine affectated writing. Butt its not a zero.
Page 1 of 23